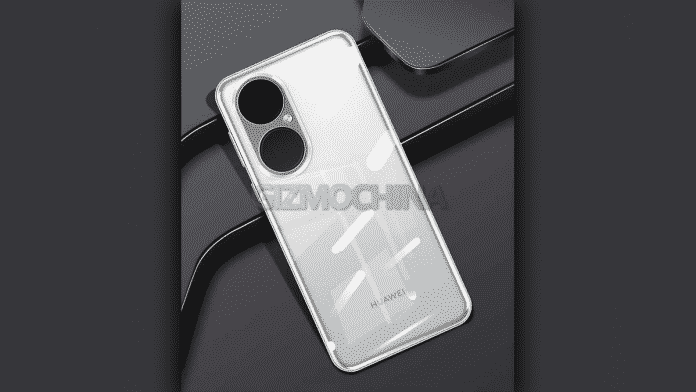 Huawei P50 series was expected to launch at the event held in April 2021. But, the launch has reportedly been delayed, most likely due to the supply chain issue. Reliable Huawei tipster, @RODENT950 has claimed that the Huawei P50 series along with some other products will get official in late June.

Recently, we came across several renders revealing the design of P50. A fresh report by Gizmochina shows the case renders of Huawei P50 that give a more detailed look at the unique camera sensors arrangement. All 4 camera sensors on the rear side are packed inside the two large circular blocks. The three sensors along with laser focus are housed inside the top circle while the other one has a single sensor, most likely a periscope lens.

As shown in the images, the Huawei P50 will have four rear cameras. Three of the sensors along with the laser focus module are housed inside the top circle while a single periscope zoom lens sits inside the second circle. There is a LEICA logo and an LED flash inside the oversized pill-shaped camera housing.

The display of the Huawei P50 has a centered punch hole and is curved in these renders, although Onleaks said in his own leak that the screen is flat. Since we are yet to see the device itself, we advise our users to take this leak with a pinch of salt.

As of now, we don’t know, how genuine these case renders are? So, take all this information with a pinch of salt. In the past, we have also come across renders that showing different camera arrangements. But, all these renders have two large circular blocks in common. The launch of the Huawei P50 series could happen in late June. If this is true, then Huawei might announce the launch details in the coming weeks.