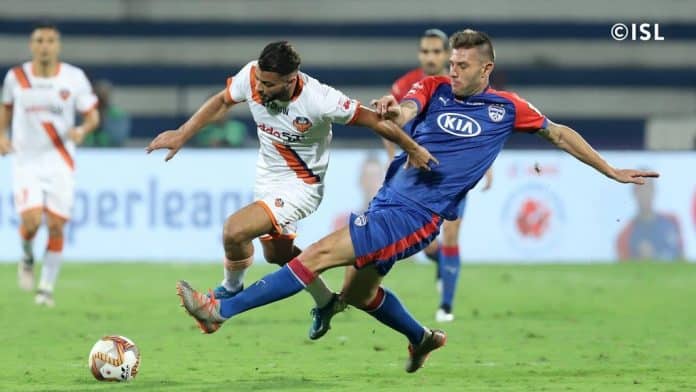 The 2020-21 season of the Hero ISL has come to an end a few days back. Mumbai City FC was crowned champion by beating ATK Mohun Bagan FC in the final by 2-1. It was the 7th edition of the league.

However, some defenders have had an excellent season this year. Here are the top 10 players with most tackles in Hero ISL 2020-21.

The North-East United FC midfielder Lalengmawia is 10th in the list with 93 tackles this season. The 20 years old is the youngest captain of Hero ISL history as well. He has led his team to the semi-final this season.

Alexandre Lima is in the 9th position in the list with 95 tackles. The Brazilian midfielder is a regular member of Jamshedpur FC’s first XI. He has helped his team so many times to win the ball higher up the pitch.

FC Goa midfielder Alberto Noguera is also on the list. The Spanish midfielder has 98 tackles in his name this season which is 8th best in the league. FC Goa was among the 4 semi-finalists this season.

Chennaiyin FC midfielder Memo Moura has 99 successful tackle in his name this season. The Brazilian has an excellent season individually despite the poor season of his team.

Another player from FC Goa in the list. The Indian youngster is 5th on the list with 101 tackles this season. The 23 years old defender is one of the best performing players in the league this season.

One of the most consistent performers in the last two seasons. Carl McHugh has made 109 tackles in the league this season and secured the 4th position in the list. His team was the runners-up this season.

Another highlander in the list. Khassa Camara has made 110 tackles this season for North-East United FC. He was excellent through-out the season which helped his team to make their place in the top 4.

The Mumbai City midfielder had the most tackles in this ISL season. He has made 173 tackles this season. No other player is even close to him in terms of tackling. He helped his side to crown as Champions this season.

Previous articlePersonalized Ads: How Does It Work?
Next articleNintendo agrees to partner with Niantic to Create Augmented Reality Apps, starting with Pikmin