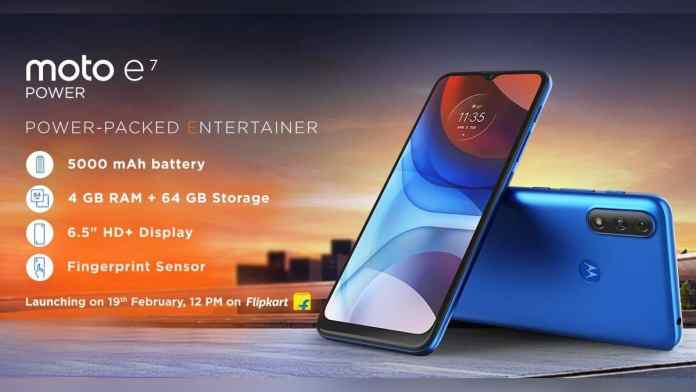 Motorola’s new device Moto E7 Power has been in talks for various reasons. Now, the company has confirmed an official launch of the device on February 19th, 2021. It is scheduled to happen at 12 PM.

Motorola is a Lenovo-owned smartphone company that will be launching E7 Power as its new budget smartphone. Moto E7 Power will be powered by Mediatek Helio G25 SoC. This smartphone will feature a 6.5-inch LCD panel and will have a screen resolution of 720 x 1600 pixels (HD+).

It comes along 20:9 aspect ratio. In terms of the front camera, you will see a 5MP selfie camera. The rear camera setup houses two cameras; 13MP (wide) + 2MP (depth) sensor. Both are aligned vertically on the left side of the back panel. The fingerprint sensor is visible at the back with the famous ‘Motorola Batwing’ logo.

Till now, we have the confirmation the smartphone will have a RAM of 4 GB and internal storage of 64 GB. This smartphone has a 4G connectivity. Other features of this device include a dual-SIM, microSD card slot, 3.5mm headphone jack, USB Type-C port, dedicated Google Assistant key.

The device will be run on Android 10. The best part about this budget smartphone is that it houses a powerful battery of 5,000mAh battery. It will be present in Digital Blue and Oxy Red colour variants. You can get the phone from Flipkart. Motorola will be hopeful that this budget smartphone helps them to increase their numbers as they compete in a very congested market that offers a lot of options to the users.