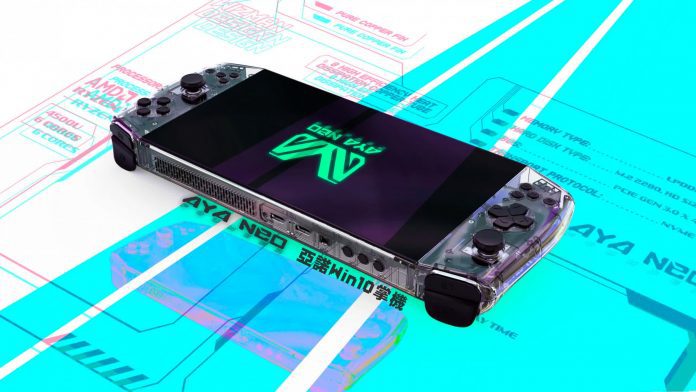 Digital gaming has seen an increase in popularity due to the pandemic. Gaming manufacturers are pushing forward to make their games more appealing and demanding to users. Amidst all this, a Redditor has spotted that the Aya Neo Founder Edition has gone up for preorder sales in China.

The Aya Neo Founder Edition focuses on gaming portability, and its design is similar to the Nintendo Switch. It features a transparent body and also RGB lighting. The system might be disappointing and nothing innovative to users. But the main power of the Arya Neo Founder Edition lies in its hardware.

AMD’s Ryzen 5 4500U APU is responsible for the new gaming device’s processor and graphical workloads. The Ryzen 5 4500U is a 7nm process based chipset. It’s a Hexa-core 15W chip based on the Zen 2 microarchitecture. Though the chip lacks simultaneous multithreading (SMT), it boasts a boost clock speed of up to 4 GHz.

In terms of graphics, the Ryzen 5 4500U comes with six Vega Compute Units (CUs) running up to 1,500 MHz. the pictures are more than enough to push modern AAA titles at max resolution. The Aya Neo Founder Edition comes with 16GB of LPDDR4X-4266 memory. The company has provided customers with the option to choose between 512GB or 1TB NVMe SSD. The SSD is reported to be the SN550 M.2 2280 SSD manufactured by Western Digital.

The portable gaming device features a 7-inch IPS touch display and boasts 1280 x 800 and a 215 PPI density. The Aya Neo Founder Edition also has a gyroscope and gravity sensor present in the design.

The handheld gaming device also features a pair of stereo speakers. But the manufacturer also provides a standard 3.5mm audio jack for connecting headphones, and the device also provides three USB-C ports, Wi-Fi 6, and Bluetooth 5.0.  the company also allows users to pair a standard wired or wireless keyboard or mouse with the Aya Neo Founder Edition.

The gaming device comes with a 47Whr battery and supports 65W fast charging. The Operating System of the handheld gaming device is based on Windows 10, hence the complexity of navigation will be severely reduced. The device with 512GB of storage is priced at $600, while the 1TB variant comes at $680.