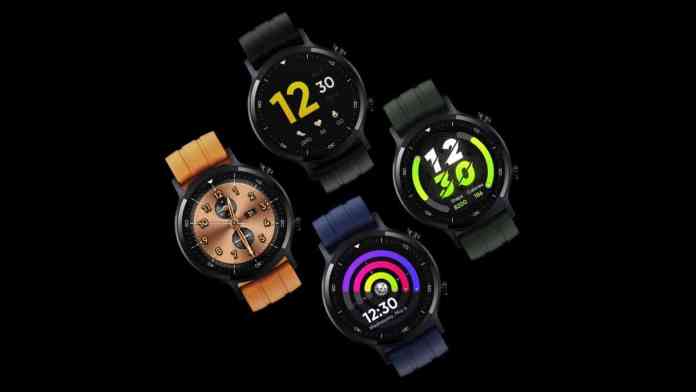 Realme debut to the smartwatch market around six months ago, in May, with its Realme Watch. After getting a satisfactory response from its fans, the company now finally expands its lineup with the Realme Watch S. Though the launch is not a surprise, rumors were leaked about it earlier. Here are all the details of the outcome.

The new Realme Watch S has a circular dial, instead of the square one, hold by an aluminum alloy frame. There are two buttons too on the right. The display offered is of 3.3-inch IPS LCD with 360×360 resolution. For protection, Realme added Gorilla Glass 3 on top along with an IP68 rating. It didn’t even compromise in the case of viewing and style. That because the Realme Watch S has 600 nits pick brightness, 5-level auto-brightness control, and the most demanded, 100+ unique watch faces.

In this smartwatch, the Realme team puts its own operating system in Google’s efficient WearOS. It’s the same as the earlier smartwatch model and comes with the same features and all. The only difference is, it is optimized for the round dial.

A 390mAh battery inside allows the smartwatch to run for up to 15 days and recharge fully; it takes around 2 hours. The company provides a magnetic charger for this purpose.

Coming to the pricing and availability details. Though this is a global launch, Realme showcased the Realme Watch S in Pakistan. In that country, this watch costs 14,999 PKR, which is around Rs.6,999. Any specific launch date for the Indian market is not announced yet, but you can expect it very soon.

Noise is one of the leaders in the Indian market that holds a good percentage of consumers mainly with smartwatches and also audio various...
Read more
Technology

In the Indian audio market, boAt is the leader above all the other brands. According to the recent report, boAt is on top in...
Read more
News

Sony has launched its next-gen gaming console, PlayStation 5 back on November 12th in the global market and releases it by a wider range...
Read more

In the Indian audio market, boAt is the leader above all the other brands. According to the recent report, boAt is on top in...
Read more
Technology

Qualcomm’s next flagship processor in the 800 series has taken the central stage. The highly awaited Qualcomm Snapdragon 888 is launched as we step...
Read more
Realme

Realme has shared the schematics of its other upcoming smartphone which shows that the smartphone features a unique oval-shaped rear camera module and a...
Read more