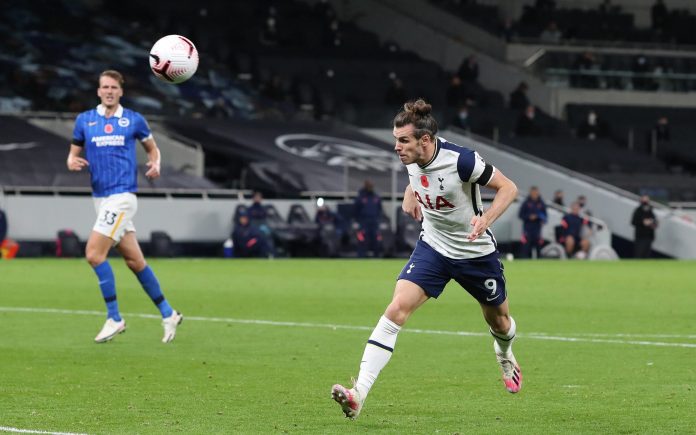 While he hasn‘t made himself an undisputed starter in his second spell at Tottenham, Gareth Bale finally managed to get off the mark in yesterday’s match against Brighton and Hove Albion in the Premier League.

The Welsh international is still nursing an injury and has not yet played a full 90 minutes for Spurs. However, he is getting there and we might finally get to see the front three of Son, Kane and Bale for Jose Mourinho’s team.

The special one was happy with what he saw from the summer arrival, and also took a swipe at his former employer’s Real Madrid.

“For a week or so now, he’s been improving,” Mourinho told a media conference. “It’s not just from watching him, the data supports that as well. We knew, Gareth knew. We share ideas and feelings.”

“He deserves that [the goal]. When I have five minutes I’m going on Safari to look at the Madrid websites to see what they say about him.”

“He showed great personality and had a great impact, scoring a very important goal for us. He also joined Harry in a very experienced way to play the last 15 minutes for us.

“They were very clever, very intelligent, especially at holding the ball up and bringing it into zones where they couldn’t hurt us.

“He knows that we care about him and he cares about the club. I think he’s a perfect fit. He’s very calm, very intelligent. I’m very pleased for him to score the winning goal.”

The Europa League is where Mourinho hopes that the Welshman will be able to earn his early minutes and work his way back to full fitness.

Spurs have been amazing in their last few matches and have managed to establish themselves as genuine title contenders this season. What truly matters is that the London club find their consistency and manage to keep their star players fit amidst the hectic schedule to make it through the season.

David Alaba is nearing the end of his contract at Bayern, and as of now, there are no talks between Bayern and David for...
Read more

Jose Mourinho is not considering Tottenham Hotspur as a title contender, Lampard disagrees

Jose Mourinho went back to Stamford Bridge to face Frank Lampard's Chelsea. The match ended in a draw as both teams failed to break...
Read more
Football

Zlatan Ibrahimovic recently called out FIFA, FIFPro and EA Sports for 'using his name or face' to make profits on Twitter. The AC Milan...
Read more