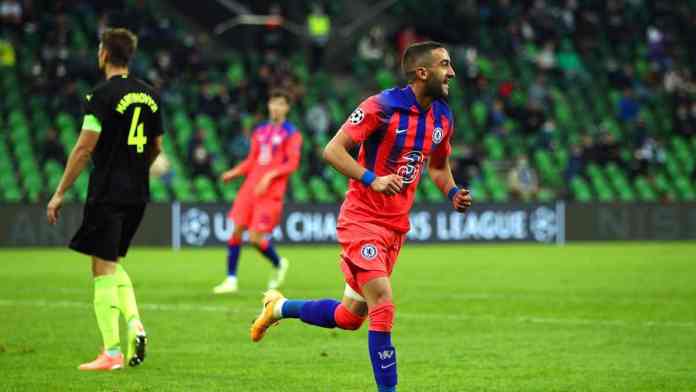 Chelsea faced Krasnodar in their second match of the 20/21 Champions League group stages. Following a 0-0 draw with Sevilla at home, the Blues had built a good foundation at the back. And they managed to build on that very foundation yesterday.

Hakim Ziyech started his first official game for Chelsea in the 0-4 victory. The only other time the Moroccan started for the Blues came in a friendly against Brighton.

The first half proved to be challenging for Frank Lampard’s side, as the Russians were quick and precise in their passing. They managed to pounce on mistakes made by Chelsea, but could not beat Mendy, who was solid between the sticks once again.

Ziyech showed his creativity in the first half, with dangerous balls into the box. However, Chelsea really found their stride after the half time as they managed to put three past the hosts with Ziyech scoring his first Chelsea goal.

Frank Lampard was all praises for the encouraging performance from his new signing, as he appreciated the work put in by the player to return to full fitness following an injury.

Lampard said: “He brought a lot of quality and calmness when he was on the pitch, and got a well-deserved goal. His performance was very, very good when you consider he hasn’t started a match since March when the Dutch league finished.”

“It’s been frustrating for him and for us his injury has meant he hasn’t been able to start, but what I’ve seen in training and what I knew we were signing is a player of immense quality with personality to receive the ball and find assists and goals. We saw a lot of glimpses of that today, and he will get better.”

“We brought him in to do a job, maybe people have forgotten a bit because we signed him in January and he missed the start of the season, but tonight he showed he is here.”