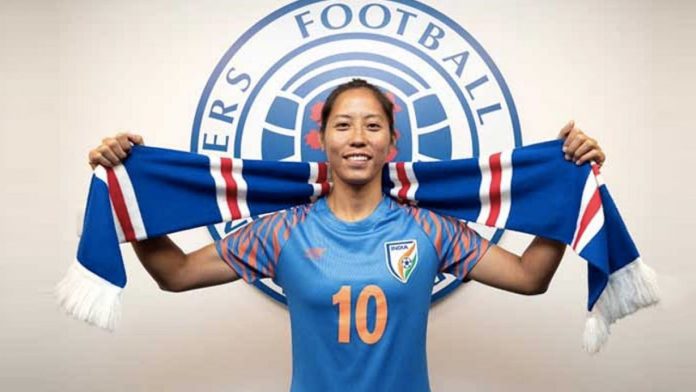 The football scene in India is still one that is developing. In the same vein, women’s football barely makes it to our TV screens. India Women’s Bala Devi hopes that the Under-17 Women’s World Cup in India will bring about a change in the current scenario.

For those unaware, Bala Devi is a brilliant forward who plays for the Indian Women’s National team and, more impressively, Scotland’s Rangers FC. She is the first Indian woman to have secured a professional footballing contract overseas.

Read all about Bala Devi on a post we covered earlier, by clicking here.

Speaking to Goal.com, Bala Devi said: “If they (the team) do well, it will help for sure. I hope by then the crowds can come back into football but it totally depends on the COVID-19 situation of course.”

“The more people that watch, the more youth will be inspired to take up the sport.”

And it is hard to disagree with the icon. Speaking about the tournament, she hoped to see the fans back in the stands for the World Cup. However, whether that can turn into a reality remains to be seen given the current restrictions on public gatherings.

The Women’s Under-17 World Cup was originally supposed to be held in India from October 2020. Unfortunately, it was postponed to February of next year, and as of the latest news, has been pushed back even further.

Considering that the most recent guidelines in the unlocking regulations proposed by the government allow 100 people to attend sporting events outside of containment zones, it might not be that long before we get to see fans in the stadiums for matches not only in India but all across the world.

India was also the host of the FIFA Under-17 World Cup in 2017, which was won by England. Bala Devi mentioned that the country hosting another major tournament of the stature of the U-17 World Cup could make young people ambitious about achieving success in the sport.

India will host the AFC Women’s Asian Cup in 2022