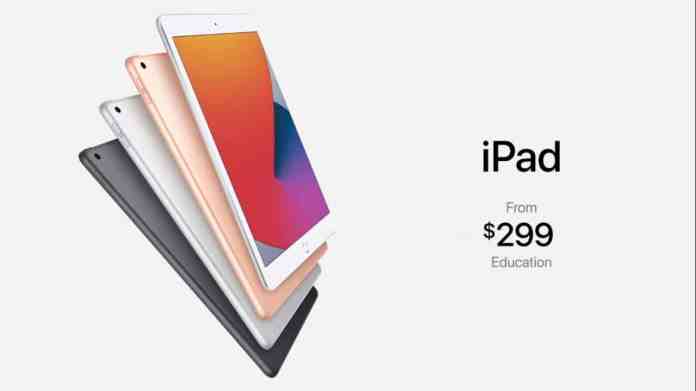 Today is the day for Apple’s September event which the company named this year “Time Flies”. Lots of new announcements have done regarding the Apple Watch Series 6, Apple watch SE, Apple Fitness+, iPad 8th Gen, A12 Bionic SoC, the new iPad Air, and lastly the A14 Bionic.

In this year, 2020, Apple completed 10 years when they 1st shipped its 1st iPad. So, it’s obvious, today’s announcement regarding iPads should be a bit special. Till now, the company sold more than 500 million iPads around the globe, and surprisingly 53% of the users are new to this device. To maintain these stats or even push it further Apple announced the improved new iPad 8th Gen and iPad Air. Have a look at all the specs of these two members. At the beginning of the iPad lineup release segment, Apple showcases the iPad 8th Gen. Have a look at all the specs.

The all-new iPad 8th Gen is powered by the A12 Bionic chip that has 6-cores CPU and 4-core GPU to make the product faster and smoother than ever. Compared with the fastest one from last year, it’s 40% faster in case of CPU performance and twice faster in graphics.

With the new iPad, Apple also provides new iPadOS 14 that enhance the capability of Apple Pencil, the most popular tool coming with iPads.

Now, the handwriting recognition, shape recognition, smart selection, and more will take the user experience higher. The Script feature converts whatever you write on the screen to typed text, not only than, through it, users can edit earlier written text in every way.

Well, the earlier mentioned features were the main attractions. Other than that, the new iPad 8th Gen is coming with a 10.2″ retina display, Apple Neural Engine, 8MP camera, 10 hours of battery life that can be refilled through a USB Type-C charger. Lastly, the entire device is made up of 100% recycled aluminum.

Coming to the pricing and availability of this iPad 8th Gen. It starts from $329 for normal customers and just $299 for education customers. Interested customers can order this feature-packed device from today and will be available from this Friday.

Nokia finally showcased its new Nokia 3.4 handset at today's (22nd Sep) Only Gadget You Need launch event. The handset with beautiful...
Read more
One Plus

The launch date of the OnePlus 8T just added to the Amazon India page and within the next 24 hours, all the...
Read more
Gaming

Most of the console lovers are currently is confused regarding where to move - either towards Sony or Microsoft. If you are...
Read more

Earlier today we've got a leak about Apple's planning to introduce a new member to the family of iPhone 12, which might...
Read more