Redmi 9A India is ready to launch on September 2 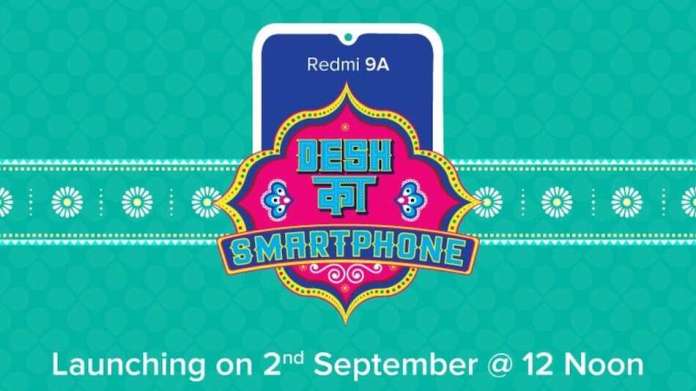 Coming to the specifications part of the phone. The Redmi 9A comes with a waterdrop notch type of a display and has only one rear camera. It has a 6.53-inch HD+ (720x,1,600 pixels) display with a 20:9 aspect ratio. The Redmi 9A supports dual-SIM (Nano) and runs on Android 10 based on MIUI 11. It is powered by an octa-core MediaTek Helio G25b Soc with up to 3GB of RAM. The Indian variant can also have a 4GB RAM version.

Coming to its camera, it is a 13MP rear camera sensor with an aperture of f/2.2. the Front Selfie camera comes with a sensor of 5MP (f/2.2). The Redmi 9A has a pretty powerful 5,000mAH battery with 10W fast charging support which comes with a micro-USB port. In general, this phone has 32GB internal storage, but its Indian variant is expected to have 128GB internal storage.

Xiaomi will host the launch event of the Redmi 9A (India) that will begin at 12 PM (noon) on September 2. From September 4, this phone is expected to go for sale in the markets. It is also rumored, that Xiaomi may change the branding of this phone as an Indian variant. But, there is no official news regarding this matter.

Regarding the specifications, this phone will be definitely a lower-budget phone. Its 2GB + 32GB variant carried the price tag of roughly 6,400 Rs. in the other countries. But in India, Xiaomi is willing to launch the Redmi 9A in 4GB + 64GB and 4GB + 128GB options. In the case of colors, this smartphone is expected to have three different color variants: Nature Green, Sea Blue, and Midnight Black. But there is no news revealed by the company, regarding the price of the phone in India.

It was quite an exciting first week of this year's IPL and four-time champion Mumbai Indians never misses an opportunity to amaze...
Read more
Mobile Accessories

OnePlus 8T is just around the corner for the official unveiling and it supposed to get some major upgrades and one...
Read more
Oppo