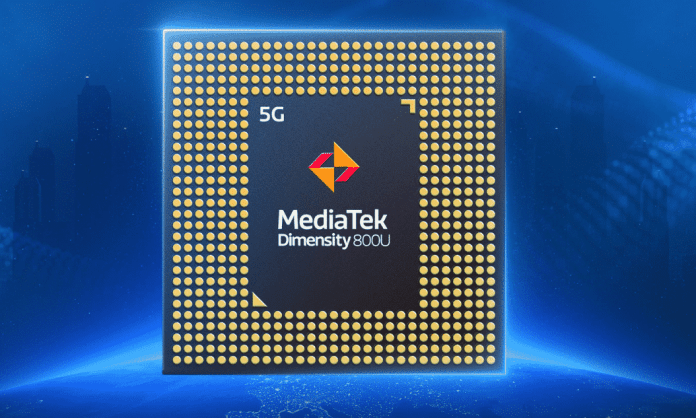 The Taiwanese chipmaker has made its Dimensity series of chipsets very powerful especially as a mid-range SoC. Obviously these are 5G capable chipsets targeting the ever growing mid-range smartphone market.

A lot of these Dimensity 800 chipsets are giving a hard times to Snapdragon 765G SoC and more vendors are using MediaTek chipsets more than ever, even Huawei too, because of their US trade ban. In the mean time, the Taiwanese chipmaker has brought in another new SoC – the Dimensity 800U with 5G support.

Recently, MediaTek also launched a lower mid-range Dimensity 720 chipset as well. So, the new 7mn Dimensity 800U seems more like an overclocked Dimensity 720. The new MediaTek Dimensity 800U features two ARM Cortex-A76 cores clocked at 2.4GHz while the other six Cortex-A55 cores are clocked at 2.0 GHz. For the GPU, there’s the Mali-G57 GPU based on ARM’s Valhall architecture.

In top titles, game launch times are up to 1.4s faster than Dimensity 700 series, while benchmark scores are up to 11% faster in CPU and 28% faster in GPU performance. It will be interesting to see how Dimensity 800U’s performance matches against Qualcomm’s upcoming Snapdragon 732G mid-range SoC.

Other key features of the Dimensity 800U different from the Dimensity 720 includes the support up to 120Hz HDR 10+ displays and MiraVision support along with enhanced HDR 10 playback capabilities. The chipset will also support LPDDR4X RAM and UFS 2.2 storage. The SoC can listen for multiple trigger words to wake up virtual assistants such as Google Assistant, Amazon Alexa, or other localized services.

On the camera front, the SoC will support up to single 64MP camera module and can make use of up to four rear camera sensors as well. MediaTek’s APU also provide great camera features like AI-enhanced Bokeh mode and much more. The Dimensity 800U’s MediaTek’s UltraSave technology helps to adjust the power consumption according to the type of load.

The people at Counterpoint Research has done a great job to bring a new report that states a complete report on the...
Read more

Taiwan’s export makes a new record in August, thanks to its strong electronics shipments

The world had a tough time in the pandemic which is still ongoing and the lockdowns did have an impact on the...
Read more
Load more