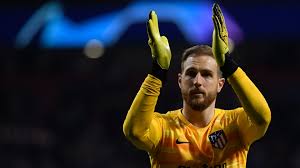 Chelsea is in transition phase under their homegrown manager Frank Lampard. They bought Kepa Arrizabalaga but he has failed to live up to expectations in the Premier League. The London side is now on the lookout for a new gaolkeeper. It is reported that Lampard has zeroed down Oblak as his new goalkeeper.

Oblak is now in Lisbon as Atletico Madrid will face RB Leipzig on Thursday in the Champions League quarter-finals. He was asked about his rumoured transfer to Chelsea.

The Slovenian international prefered to talk about the reported transfer later and remain focus on Atletico Madrid’s Champions League match.

Jan Oblak said: “This is not the time for that, now it’s Leipzig. The balance of the season I will consider when the last game is over and hopefully we have three left. Then there will be time to talk. But first, Leipzig. I really want to qualify.”

“Lisbon is a special city for me. I came here at the age of 17, then I was on loan with several teams in Portugal from different cities, but Lisbon is the first city I went to when leaving my country. I have a special memory in my head, but it does not matter a bit to win the Champions League in Lisbon, Madrid, Milan or London, it will mean the same to me and hopefully, it will be this year.”

It seems Oblak is looking to take the next step in his career and wants to join Lampard’s Chelsea next season.

Only days after the official announcement of the signing of Luis Suarez by Atletico Madrid, the Uruguayan made his debut from the...
Read more
Load more