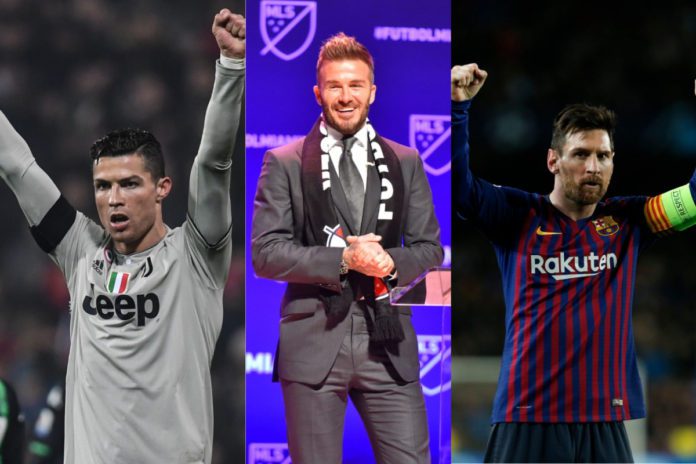 It is a dream for most of the football fans to see Messi and Ronaldo play in the same team for at least once. Now this dream has a slight chance of becoming a reality.

England great David Beckham owns the MLS side Inter Miami. He suggested that his side has a great opportunity to sign both Messi and Ronaldo.

The former Manchester United and Real Madrid midfield maestro’s side will make their MLS debut against Los Angeles FC on Sunday. Beckham could lure both players to Miami after Minnesota United head coach Adrian Heath talked up the possibility of seeing both the legends of this game in the United States.

Beckham addressed the transfer speculation during his appearance on ‘The Tonight Show Starring Jimmy Fallon’ on Wednesday. He said: “Well you know what, we’ve got great opportunities down in Miami.”

“We’ve been contacted by a lot of different players with possibly coming to join the team. As any owner, you really want the best players and if we have the opportunity to bring in players like Cristiano or Leo, I have such admiration for them as athletes, if we could bring those players in than great.”

“But at the moment, we have a great roster. Young players, a couple of experienced players too, but a lot of young players who are just ready to play.

“One of the things I learnt from [former United manager] Alex Ferguson… he turned around to me and said whoever you bring in, they have to be the right fit for the club. It’s not about the biggest name or personality, it’s about who fits in best with the players.

“That’s what we’ll do. But like I said, as an owner if you want to bring these players in than we have a great opportunity.”

Inter Miami has also been linked to Manchester City’s David Silva, Paris Saint-Germain forward Edinson Cavani and Real Madrid midfielder Luka Modric. But if they can bring both Lionel Messi and Cristiano Ronaldo in the same team, it would create history.

The two best players playing alongside each other will be a treat to the eyes. Imagine watching Messi providing his trademark defense breaking pass to Ronaldo, who then sprint and produce a perfectly-timed finish. What a day it would be for the football fans!

Previous article
Arsenal crash out of the Europa League
Next article
Juventus vs Inter: The probable Serie A title decider has been postponed due to Coronavirus