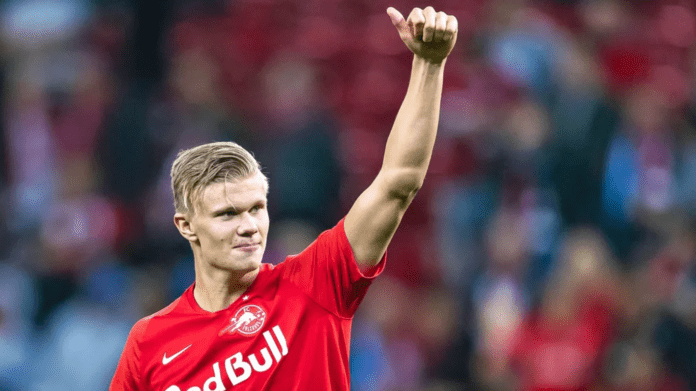 Borussia Dortmund have beaten off competition from top European clubs to get the signature of Erling Braut Haaland.

Borussia Dortmund have won the race to sign the much-coveted 19-year-old from Red Bull Salzburg. The Norwegian striker has been the taking point of this season.

Haaland has agreed to join Dortmund on a deal that will run until the end of the 2023-24 season.

Haaland has only spent a year with Salzburg. The Austrian club signed him from Molde. During his time at Salzburg, he rose to prominence with his scoring feats at both domestic and European level. He found the net in his first five appearances in the Champions League group stage.

He said in a statement published on Salzburg’s official website: “My move to Salzburg was the best decision of my life so far. So much has happened in the last year, it’s hard to believe. I had the opportunity to learn so much in a perfect environment and in a short time. I am extremely grateful to everyone in the club for this.”

“I am proud to have been part of this team and I wish everyone that the season in Salzburg can continue so successfully.
For me, the journey continues at Borussia Dortmund, but I will always look back to Salzburg with joy.”

Salzburg sporting director Christoph Freund said: “It is unbelievable how Erling developed with us and what outstanding achievements he has achieved together with our team. We are proud that we were able to bring another young player to this level of performance.”

The teenager has scored a remarkable 28 goals in 22 appearances across all competitions this season. A tally of 16 goals in 14 Austrian Bundesliga games is impressive, but Haaland’s most notable performances came at the highest level of European club football.

Haaland scored a hat-trick on his Champions League debut against Genk on 17th September. He became the first teenager to score more than one goal on his maiden appearance in the competition since Wayne Rooney in 2004.

He scored more goals against Liverpool and Napoli to take his tally to seven goals from just four games. It is a record haul for a teenager in a Champions League campaign. He swiftly surpassed the previous benchmark of six goals set by Raul and Kylian Mbappe.

He then went on to become only the third player, after Alessandro Del Piero and Diego Costa, to score in his first five matches in the competition when he grabbed another goal against Genk on 27th November.

Prior to his Champions League heroics, Haaland also made quite the impression at the Under-20 World Cup in May. In a shockingly one-sided 12-0 win for Norway against Honduras, Haaland scored nine goals, breaking the previous individual record of six goals held by Brazil’s Adailton.

Borussia Dortmund have beaten off reported competition from the likes of Manchester United, Juventus and RB Leipzig to sign the 19-year-old. German outlet Kicker claim the transfer fee is in the region of €20m.

Haaland will move to Dortmund as soon as the transfer window officially opens on 1st January and he will link up with his new team-mates at the club’s winter training camp in Marbella on 3rd January.

Haaland told the club’s official website: “I had intensive discussions with the club management and the sports management, especially with Hans-Joachim Watzke, Michael Zorc and trainer Lucien Favre.”

“There was a feeling right from the start that I absolutely wanted to switch to this club, go this route and play football in this incredible Dortmund atmosphere in front of more than 80,000 spectators. I’m already burning for it.”

Haaland could make his debut when Lucien Favre’s side travel to face Augsburg in the Bundesliga on 18th January.