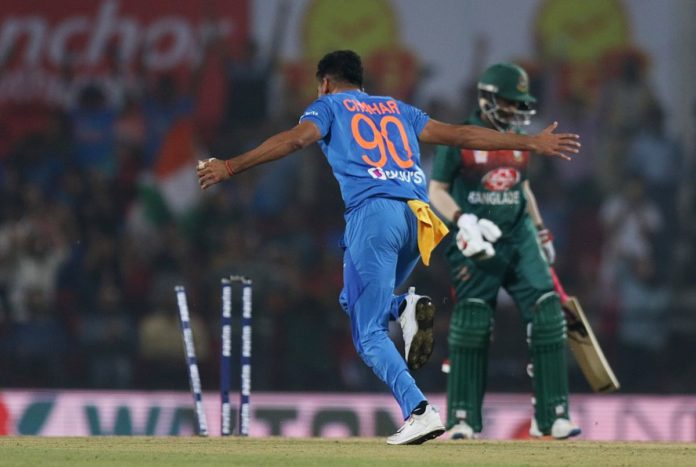 Deepak Chahar scripted history as he became the first Indian male to claim a hat-trick in Twenty20 Internationals (T20I) during the third T20I against Bangladesh in Nagpur on Sunday.

Chahar’s sensational bowling figures at Vidarbha Cricket Association Stadium in Nagpur brought Bangladesh down on its knees as the Indian pacer shattered several records in a match that was once in visitor’s favour thanks to Mohammad Naim’s (81 off 48) blinder.

Chahar broke the back of Bangladeshi batting line up by bagging 6/7 in his four overs (3.2), taking a hat-trick to finish the business as Bangladesh tumbled and lost the match by 30 runs and series 2-1.

But it didn’t stop there. This was Chahar’s maiden five-wicket haul and his bowling figures on Sunday night happened to be the best T20I figures ever. He was awarded Man of the Match and Man of the Series for his invaluable contribution to the Rohit Sharma-led squad.

Chahar’s sensational bowling figures of 3.2-0-7-6 brought Bangladesh down on its knees. He is the 2nd Indian bowler to claim a T20I hat-trick.

Chahar went past Sri Lanka’s Ajantha Mendis who had taken six wickets for eight runs against Zimbabwe back in 2012.

Apart from Chahar and Mendis, who has picked up six wickets twice in T20Is, Yuzvendra Chahal is the only other bowler who has claimed six wickets in a T20I match.

In the match, India posted 174 for five after being put into bat by Bangladesh in the series-decider in Nagpur.

Shreyas Iyer top-scored for India with a knock of 62 while KL Rahul chipped in with a half-century.

Chahar finished the game in the last over by picking up two wickets in two balls to bowl out Bangladesh.