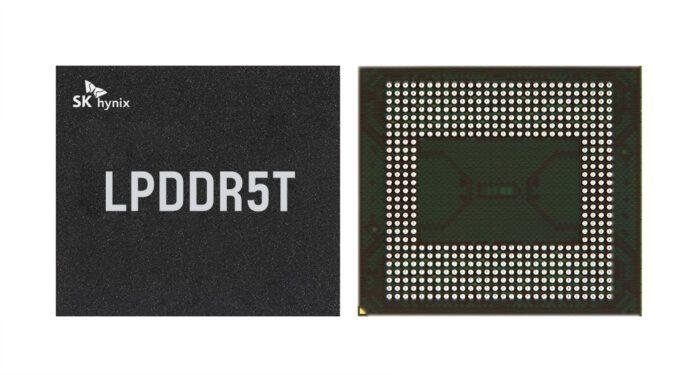 The innovation from DRAM giant SK Hynix isn’t stopping here as it has recently announced the launch of the successor to its high-speed LPDDR5X memory. Yes, it’s called the LPDDR5T (Low Power Double Data Rate 5 Turbo) RAM which is touted to be up to 13% faster than the best available in the market i.e. LPDDR5X.

The giant says in its press release that it has also provided sample products to customers. This new product, LPDDR5T, operates at a whopping data rate of 9.6 gigabits per second (Gbps), increasing the memory bandwidth even further. So, to highlight the maximum speed the product features, SK Hynix added ‘Turbo’ at the end of the standard name LPDDR5.

The speciality of this new memory is that it can operate at an ultra-low voltage range of 1.01 to 1.12V set by the JEDEC as well as have ultra-low power consumption. SK Hynix has sampled 16GB multi-chip packaging that combines multiple LPDDR5T chips into one package. This package helps to process 77GB of data per second, which is equivalent to transferring fifteen FHD (Full-HD) movies in one second.

“The company pushed the technology to new limits in just two months after LPDDR5X, mobile DRAM with 8.5Gbps specification, was introduced to the market in November 2022,” SK Hynix said. “We will solidify our leadership in the mobile DRAM market by providing products of various storage capacities that meet customers’ needs.”

The memory giant is said to start mass production of LPDDR5T using 1anm, the fourth generation of the 10nm technology, in the second half of the year.

Also Read: A great move by Tata Motors, the Automotive Giant to partner with ICICI bank for EV dealers

- Advertisement -
Powered by JustWatch
Share
Facebook
Twitter
Pinterest
WhatsApp
Linkedin
Previous article
Mohammad Siraj and Shreyas Iyer made it to the ICC ODI team of the year, and Babar Azam named the captain
Next article
Poco X5 Pro with Snapdragon 778G SoC will have an aggressive pricing