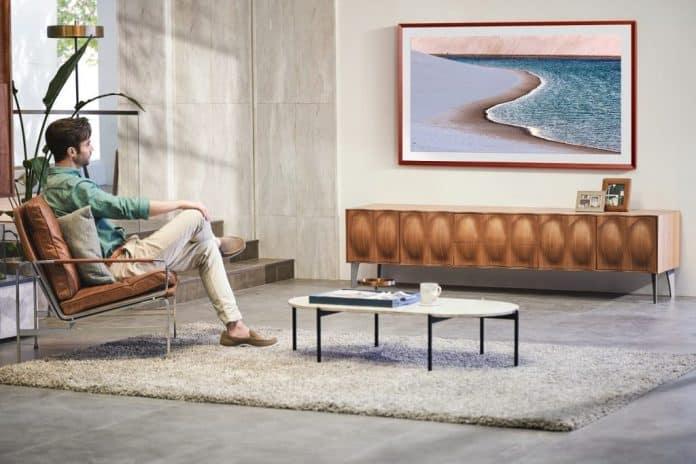 In a world of smart TVs, Samsung is one of the few companies that is trying to sell it as a piece of art. The Frame TV has been among the fanciest option in the premium smart TV space and Samsung now has a 2021 version of the same. It’s called The Frame TV 2021 and Samsung says that it is thinner by 46 percent than the older model. The starting price is now also lower.

Samsung has launched the latest edition of its Art series television in India, with Samsung The Frame 2021 QLED 4K TV. Along with key new technologies, the big sales pitch for The Frame 2021 is the use of magnetic panels in its bezels, therefore giving users the opportunity to customize the way their TV looks.

As seen before, the Samsung The Frame TV (as awkward as that name sounds) will focus on using art installations as screensavers of a sort, and with the 2021 edition, get a wider collection of art pieces pre-loaded in the TV itself. The customizable bezels will be available for users to buy at an added cost, but Samsung India has announced an ‘early bird’ offers that would also give complementary bezels to the first buyers of the TV.

Samsung The Frame TV 2021 ships with a 4K QLED panel across all models. It also runs Samsung’s Quantum 4K AI processor that upscales all content to 4K. The ambient light sensor adjusts picture parameters based on the environment. There’s a motion sensor thrown in the mix, too, which dims the panel when nobody is around. Lastly, its adjustable stand also makes cable management a whole lot easier, along with the included One Connect box that discreetly interfaces with your TV via a translucent cable.

The latest version allows customers to customize their panel with easy-to-replace magnetic bezels that come in two different colours. The TV, when not in use, becomes a picture frame that displays artwork and photos just like they would be on paper, canvas, or film ornamenting the wall on which it is mounted. The artworks that the frame will show are from the collections of world-renowned institutions and users can subscribe to them for Rs 299 per month or select an individual piece of art for Rs 1,199. To help with AI art suggestions, Samsung has increased the internal storage space to 6GB from the earlier 500MB.

With The Frame TV, one can also upload or display their own artwork of photographs via a smartphone or the SmartThing app or USB flash drive. It is compatible to connect with several smart devices and can be operated with One Remote Control for TV and Frame. Its AirPlay 2 features allow consumers to stream and share content from Apple devices to the Frame effortlessly.

Samsung The Frame TV 2021 price in India starts at Rs. 61,990. The TV models will come in 43-inch, 50-inch, 55-inch, and 65-inch screen sizes and will be available for purchase through Amazon, Flipkart, and Samsung’s official online store starting June 12.

Launch offers on The Frame TV 2021 include a complimentary bezel worth up to Rs. 9,990 for customers making their purchases between June 12 and 21 and a cashback of up to Rs. 3,000 on no-cost EMIs through HDFC Bank debit and credit cards. There will also be no-cost EMI options for up to 24 months from other leading banks. The Frame TV 2021 was launched globally in January, alongside the company’s new Micro-LED and Neo QLED TVs.