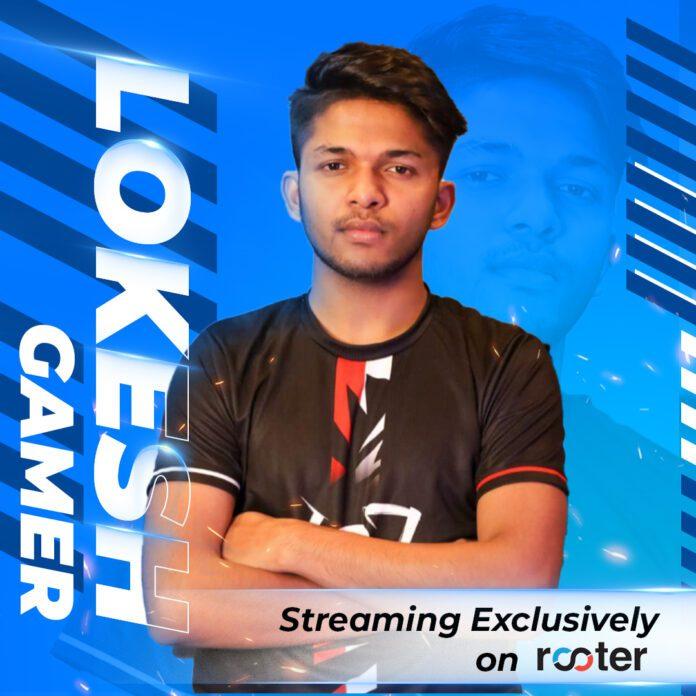 Rooter, India’s largest game and esports content platform, has signed an exclusive long-term deal with leading streamer Lokesh Raj Singh, popularly known as Lokesh Gamer. Going forward, the YouTube star will live stream all of his gameplays – including his popular Free Fire matchups – exclusively on the Rooter platform. The association further strengthens Rooter’s robust presence in India’s game streaming space, which is currently estimated to have more than 400 million gamers. More importantly, it moves the platform one step closer to its vision of building the largest and most engaging gaming content library for Indian esport enthusiasts and game streamers.

Rooter currently hosts some of the top streamers, including most of India’s biggest esports teams (Godlike, Orangutan Gaming and more) as well as 30 upcoming esports teams. In recent months, it has also signed deals with popular streamers such as Jonathan, Shreeman, Neo, Rox and more, increasing its repository of top gaming content. Its association with Lokesh, who has over 15 million subscribers on his gaming channel, marks another stellar addition to the growing cast of gaming streamers on the platform.

Speaking on the subject, Dipesh Agarwal, Co-founder and COO, Rooter, said, “The market for live game streaming and game-based content creation as a medium of entertainment has exploded over the last few years. As the largest and most preferred game streaming platform in India, our aim is to be the destination for the most engaging and interactive content experiences. We have been strengthening our tech capabilities and product features, which have attracted many popular streamers and tons of fans. Bringing top creators like Lokesh on board is another step towards our long-term goal of becoming the de facto live streaming and engagement platform for Indian gamers and gaming enthusiasts.”

Expressing his excitement about launching his channel on Rooter, Lokesh Gamer said, “Rooter has built a strong presence in the Indian live game streaming space in the last few years. With several interesting product features like the capability of directly streaming from the app, personalized user feeds and monetization models, they’ve created great opportunities for content creators to grow and fans to enjoy engaging content on the platform. I am excited to partner with Rooter and look forward to interacting with their strong gaming community and delivering entertaining live streams.”

User interest in game streaming on Rooter has increased significantly nearly 120k hours of gaming content being streamed every day on the platform, attracting over 70 lakh daily views

Top streamers have also seen their follower base increase drastically since beginning their streaming operations on Rooter. For instance, in just six months of streaming on Rooter, popular creators like Jonathan and Shreeman Legend have built a follower base of 1 million on the platform. Other popular Rooter gamers like CeltzRoxx, have also posted healthy growth in key metrics with an 8% week-on-week increase in their follower count.