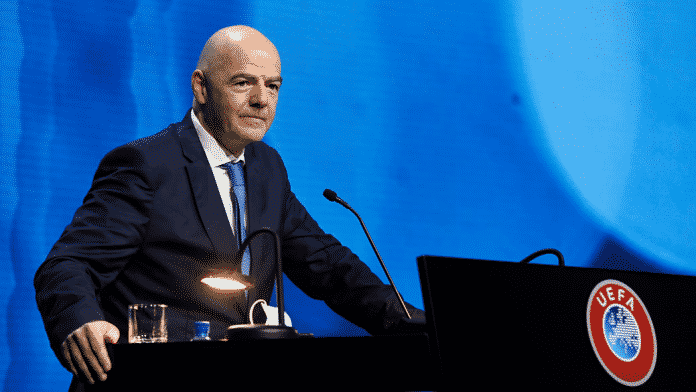 The FIFA President emphasised his full support to the European sports model, a successful model of openness and inclusivity, promotion and relegation

ZURICH, Switzerland, April 20, 2021/ — FIFA President Gianni Infantino has called for respect and dialogue as he expressed FIFA’s strong disapproval of the proposed European breakaway league project, and has requested that the concerned parties consider their position in line with respecting the institutions that exist to protect the interest of national, European and global football.

“FIFA is an organisation which is built on values, the true values of sport,” said the FIFA President in his address to the 45th Ordinary UEFA Congress in Montreux, Switzerland. “It is an organisation that is built on our statutes, the statutes that define the institutional framework, with the pyramid, with FIFA, the confederations, the associations, the leagues, the clubs, the players. And at FIFA, we can only strongly disapprove the creation of a super league which is a closed shop, which is a breakaway from the current institutions, from the leagues, from the associations, from UEFA and from FIFA, which is outside of the system. There is no doubt whatsoever of FIFA’s disapproval for this.”

The FIFA President emphasised his full support to the European sports model, a successful model of openness and inclusivity, promotion and relegation, and a model that he promoted in his 16 years at UEFA: “FIFA is here, and I am here today as FIFA President, to bring full support to European football, to UEFA, and the 55 member associations of UEFA and of FIFA, to the leagues, clubs, players and to fans. To all the fans, all over Europe, and actually all over the world as well.”

“We can see that there is a lot to throw away for the short-term financial gain of some,” the FIFA President added. “People need to think very carefully, they need to reflect, and they need to assume responsibility. They need to think not only of their shareholders, but they need to think about all the people, of all the fans, of all those who have contributed to make European football what it is today. It goes back not only decades, it goes back more than one hundred years. People – with love, with passion, with commitment – have created all this. And we need to protect this. It is our task.”

“FIFA is a democratic organisation, an organisation that is open,” the FIFA President concluded. “Everyone can bring ideas and proposals, but always with respect for the institutions, leagues, associations, UEFA and FIFA. With respect for the history and with the respect for the passion of so many people around the world. I understand as well that in these particular days, emotions are very high, but we need to always keep the line. Football is hope, and it is our responsibility to make hope reality. So we hope that everything will go back to normal, and that everything will be settled, but always with acting responsibly, with respect, with solidarity, and always in the interest of national, European and global football.”

What are the Parameters for becoming a FIFA recognized standard football stadium?

Byjus will end its ties with BCCI, ICC, and FIFA