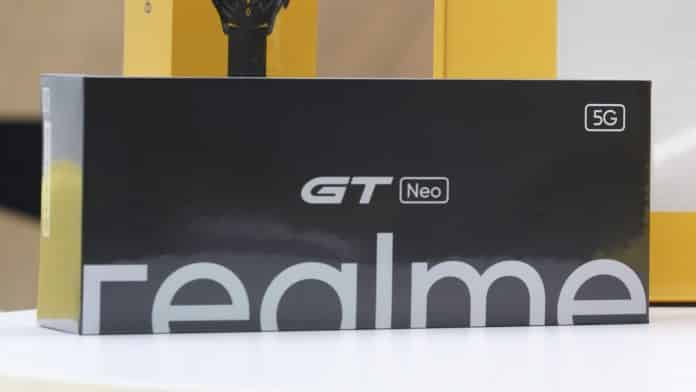 This GT Neo is about to launch on 31st March and about a week before launch, Realme revealed its official first look. The color of the device which we’ve been shown here is called “Final Fantasy”. As per Realme, this fancy design has used the micron-level process to get the matte-finished textures. But, this time, we’ll not get to see the big “Dare to leap” branding on the back. It will be written in smaller fonts at the left-bottom of the back.

Apart from it, the retail box images of Realme GT Neo have got leaked recently. It looks like a black box this time, with a traditional Realme design.

In terms of ports and buttons, this phone has a power button on the right, Volume rockers on the left side. Also, it has a 3.5mm audio jack, Type-C port, microphone, and Speaker at the bottom.

Now. let’s talk about some other internal key specifications. This phone has already been confirmed that it will run Realme UI 2.0 based on Android 11 and will be powered by the MediaTek Dimensity 1200 chipset paired with 6GB/8GB LPDDR5 RAM, and UFS 3.1 storage. It is also expected to have an AMOLED display with a refresh rate of 120Hz whereas the battery and charging capacity will be similar to the Realme GT (as said).