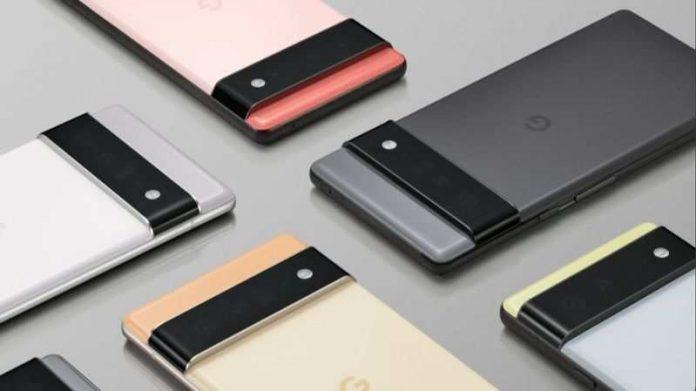 Google’s much-awaited Pixel 6 is finally set to take on Apple, Samsung, and other smartphone flagships. With a brand new chipset exclusive to the Pixel 6 series, called the Tensor, Google has gone all-in to ensure that the series lives up to the hype.

Renders of the device that have appeared so far show off the unique camera design of the Pixel 6, this horizontal bar design that is featured on the Pixel 6 and 6 Pro, appears to be similar on both the devices but is actually different. The Pro version will have more space above the camera bar in comparison to the regular version. It will also come in a light polished aluminum frame as opposed to the Pixel 6 that will have a matte aluminum finish. The front-camera setup on both the devices will be the same, a centrally located punch-hole display and supposedly with thicker bezels.

Unfortunately, we do not know the exact specs of the camera as there has been no information regarding that yet. All we know is the Pixel 6 Pro will have a triple-camera sensor with a telephoto lens with 4x zoom capability whereas the Pixel 6 will have the same camera specs with the exception of the telephoto lens.

Coming to the display, the Pixel 6 Pro will have a 6.7″ QHD+ display with a high refresh rate of 120Hz while the Pixel 6 will come with a 6.4″ FHD+ screen with a 90Hz refresh rate, the Pro version has slightly curved edges in comparison to the Pixel 6.

The most exciting part of the Pixel 6 series has to be the Tensor chipset that Google has come up with, it will assist in powering the AI and Machine Learning for the devices. There is not much known about the chipset or its components, google claims to have improved speech recognition and voice recognition, improved recognition of voice commands, translation, captioning, and dictation as well. Both the devices will support 5G which comes as no surprise.

The Pixel 6 Series will run on Android 12 out-of-the-box and will have a ‘Material You’ interface. This interface is Google’s new template and the UI will be able to select and blend colors as you wish and will make every design unique with the new Material You design language.

The Pixel 6 series will also feature increased security with the Tensor chipset, and Titan M2 security chip, it will have an in-display fingerprint scanner.

Google will release the Pixel 6 in shades of pink, black and gray. We have no clue as to when it will launch in India as the flagship Pixel 4 series and Pixel 5 series were not launched in India earlier. Google has stuck to launching affordable ‘A’ series of Pixel phones like the Pixel 3A and 4A.

We can estimate the price of the devices to retail around $1000(74,256 INR) and the pricing will most likely be in line with the iPhone 13 models, we can expect them to retail above 1 lakh INR if launched in India.

The Pixel 6 series will officially launch in October and we can expect it to go on sale towards October end.