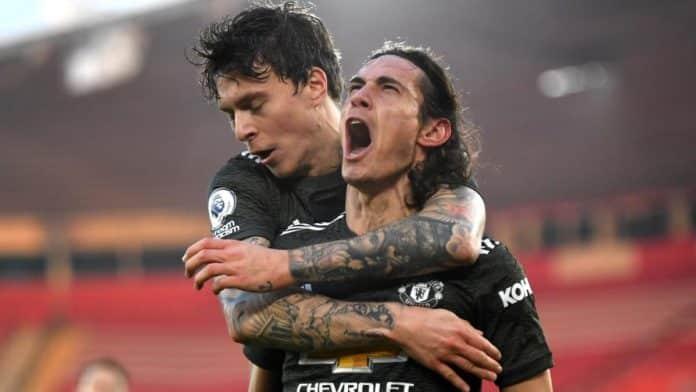 Manchester United’s new signing Edinson Cavani finally proves his worth as Manchester United came back from 2 goals down in the first half to a 3-2 win in the second half against Southampton. Edinson Cavani scored 2 goals and set up one for Bruno Fernandes after coming on as a substitute in the half time in place of Mason Greenwood.

Manchester United travelled to St Mary’s Stadium to face Southampton FC in the Premier League. Manchester United boss Ole Gunnar Solskjaer started with a 4-1-2-1-2 formation with a diamond in midfield. Anthony Martial was out of this game with an injury and Mason Greenwood started this game along with Marcus Rashford.

In the 23rd minute, Jan Bednarek scored for the home side as he tucked the ball into the net from a corner. Southampton doubled their lead with a stunning free-kick by James Ward-Prowse at 33rd minute.

Manchester answered back in the second half as Bruno Fernandes scored the first goal in the 59th minute from the cross of Cavani. After that Edinson Cavani scored a brace and Manchester United won it again in the ‘Fergie Time’.

After the match, Ole Gunnar Solskjaer said, “After the first half, we played well again. It’s one of those that when you win, they don’t really matter. At the end I was so proud at 2-2 because we did so well. This team is getting better and better and improving which is what I want to see. We are fit.”