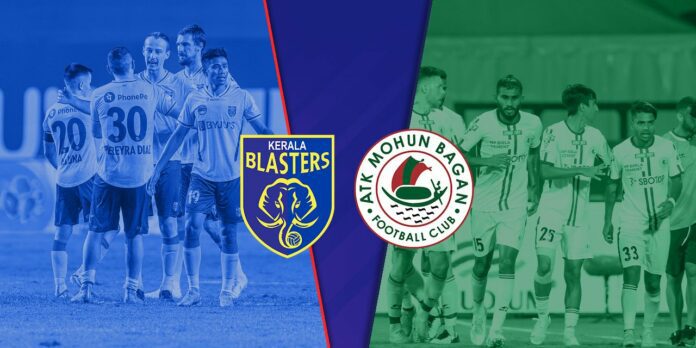 Visitors ATK Mohun Bagan mounted a dramatic turnaround to register their first victory of the season with a resounding win against the likes of Kerala Blasters in their own backyard. Dimitri Petratos scored the new Hero ISL season’s first hat-trick as ATK Mohun Bagan ran riot against rivals Kerala Blasters at the Jawaharlal Nehru Stadium in Kochi, Kerala.

Petratos’ treble helped The Mariners earn a scintillating 5-2 win as they extended their undefeated streak against The Blasters to five games in the Hero Indian Super League (ISL). The Blasters started the game well, and early pressure paid off as the Ukrainian combined well with Sahal Samad on the right before beating Vishal Kaith at the near post.

The stands were silenced in the 26th minute after Boumous sprinted down the left flank and skipped past Ruivah Hormipam before unselfishly putting it on a plate for Petratos to tap the equaliser in. The game turned on its head in the 38th minute when Manvir Singh spotted Joni Kauko darting towards the box from midfield.

ATK MB weathered the storm and took a 2-1 lead into the break. They added on the lead before a mistake from Vishal Kaith almost gave Blasters a chance to sneak back in. And much to the delight of the travelling fans, the Bengal-based team added to their tally after Australian Petratos notched up his second goal of the night to make it 1-3 in favour of the visitors before a Vishal Kaith howler gave the Blasters some hope in the nervy late minutes of the game.

At the other end, two minutes later, Boumous played another beautiful pass through to Colaco. The winger raced into the box and rolled it into the path of Petratos who smashed it home to establish a two-goal cushion. ATK MB’s Florentin Pogba came on for Boumous in the 71st minute as the Mariners went on the defensive to protect their lead.

Nine minutes from the full-time whistle, a Vishal Kaith blunder enabled Rahul Kannoly Praveen to pull one back. Rahul’s cross from the right flank picked up a slight deflection and slipped through the gloves of Kaith and snuck into the goal from in between his legs as the Blasters pulled themselves back into the game.

But, things took an ugly turn for the home team as the mariners notched up two more strikes in quick succession as Lenny Rodrigues’ 88th-minute sails took the wind out of the Blastrs’ sails before Petratos capped off a memorable night for himself and his team with another goal in added time to complete his treble against the mighty Kerala Blasters in their own backyard.

The game ended 2-5 in favour of the mariners who managed to maintain their unbeaten record against the team from Kerala. The Blasters will be on the road for the first time this season as they travel to face Odisha FC on Sunday (Oct. 23rd), in their next fixture. ATK MB will return home for the Kolkata Derby against East Bengal FC on October 29th.