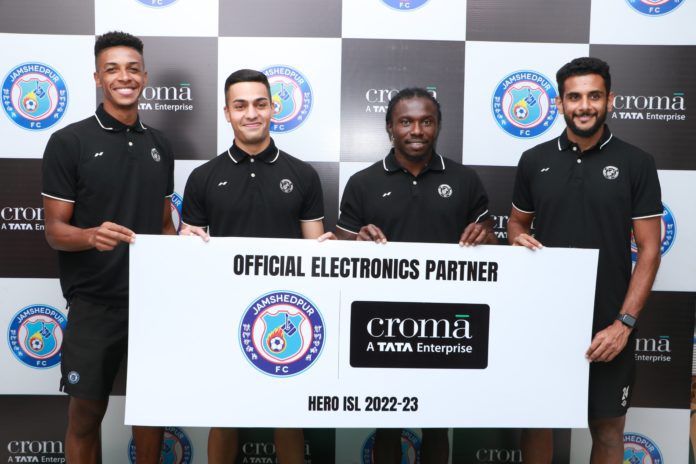 Jamshedpur known as Tatanagar, is a well-known industrial city with the TATA Steel being the predominant heavy industry operating out of the city, it has a catchment of good residential population and high prominent streets. Besides Tata Steel, it is one of the largest urban agglomerations in the state which boasts of around 1000 industrial units and is a major rail and road junction which makes this location a thriving business hub and home to consumers who are looking for the best in electronics.

Croma has always been known for its consumer-first approach and it has helped the brand gain trust over the years. Through this sponsorship, Croma aims to boost its connection with football fans and reinforcing its strong vision to become no 1. Omnichannel electronics retailer in the country with young India. As football in our country reverberates with the young and the enthusiastic lot, Croma envisions an association that would bring the youth/new-age closer to the brand and create a sense of belongingness with the fans.

Speaking on this partnership, Shibashish Roy Chief Business Officer, (eCommerce & Marketing) Croma – Infiniti Retail Ltd said “ We are pleased to announce our partnership with Jamshedpur FC. Indian Football is achieving new heights with every passing year and Croma is proud to be associated with one of the leading teams in the country. At Croma, we are always looking for ways to reaffirm our commitment to the local community and also their passions. Our association with Jamshedpur FC is a step in that direction.”

Jamshedpur FC CEO, Mukul Choudhari was ecstatic to have Croma associated with the club, as he said, “We take immense pride in having India’s first large format specialist Electronics retail store as our partners for the upcoming season. We look forward to working closely with Croma to develop new ideas and engaging projects focused on football fans in Jharkhand as well as interacting with the wider football community in India.”

The Jamshedpur FC line-up for the ISL 2022–23 will feature top players. The new 2022-23 Hero Indian Super League season kicked off yesterday. The Jamshedpur FC will take on Odisha FC in their first match at the JRD Tata Sports Complex in Jamshedpur on October 11, 2022.

Previous article
Mahindra XUV 300 TurboSport: XUV Features Turbo Petrol Motor with More Updates
Next article
Carlo Ancelotti reveals the name of the only two players, in his entire 30 years of coaching, who wanted them to be rested