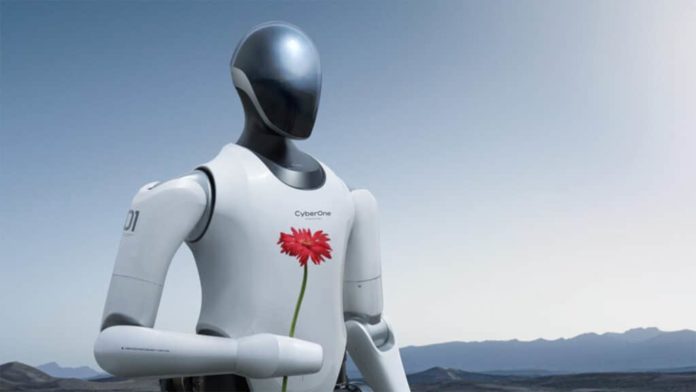 Xiaomi has just unveiled its very own humanoid robot prototype during a livestream yesterday. Officially named the “CyberOne,” Xiaomi also calls the robot “Metal Bro” and even gave it its own zodiac sign (Leo). Based on the presentation yesterday, CyberOne is on a whole new level compared to the CyberDog, the famous robot dog with impressive capabilities.

The robot stands 5.8 feet tall and weighs 115 pounds, walking on stage alongside the company’s CEO Lei Jun before handing him a flower and then posing for a selfie together. The whole body carries 13 joints and allows for 21 degrees of freedom, each capable of responding in a mere 0.5 milliseconds. While the arms rely on actuators with an output torque that maxes out at 30Nm, its legs can reach a peak torque of a whopping 300Nm instantaneously.

Moreover, its face is made of a curved OLED panel and it can see the world in 3D and hear its surroundings with its two built-in microphones. Xiaomi asserted that the CyberOne combines sophisticated mechatronics and artificial intelligence (AI) created by its specialized Robot Labs. The new robot utilizes two microphones to help recognize “85 types of environmental sounds and 45 classifications of human emotion,” interacting with its surroundings.

“With AI at its core and a full-size humanoid frame as its vessel, this is an exploration of possibilities of Xiaomi’s future technological ecosystem and a new breakthrough for the company,” Lei said. CyberOne is equipped with a self-developed Mi-Sense depth vision module combined with an AI interaction algorithm, which makes it capable of perceiving 3D space and recognising individuals, their gestures, and expressions.

Xiaomi states that in the future, the robot will be able to be used in the manufacturing industry as well as to function as a buddy robot. However, it’ll be a while before we see robots like these in our homes. At the moment, CyberOne should probably be seen mostly as a prototype that so far does not seem to be able to perform many practical tasks.

Unfortunately, consumers probably won’t be able to get hold of a personal Metal Bro any time soon. Lei says that the robot currently costs roughly between $89,100 USD to $104,000 USD, but it hopes to continue expanding on its capabilities and skillsets.