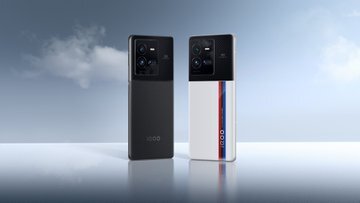 iQOO will be launching the 10 Series lineup on the 19th of July in China. The brand has already opened up the pre-orders for both the devices via Vivo China’s official site and select retailers such as Jingdong Mall and Suning. The retailer listing arrives with the official images of the phones as well.

The upcoming flagship lineup will feature two models, the 10 and the 10 Pro, both of which feature a punch-hole camera display. The vanilla version has a flat display while the Pro version has curved edges. On the rear, we see a dual-tone design with a triple camera setup at the top.

Here’s what we know about the iQOO 10 Series, the case variant will arrive with a 6.78″ AMOLED E5 FHD+ display with a refresh rate of 120Hz, a 16MP selfie shooter, and a triple camera setup featuring 50MP+13MP+12MP sensors. On the front, it has a 16GB sensor. The smartphone will be powered by the Snapdragon 8 Plus Gen1 chip with support for 8GB/12GB LPDDR5 RAM and 256GB/512GB UFS 3.1 storage. In terms of battery life, we get a 4,700mAh battery with support for 120W fast charging support.

The iQOO 10 Pro will launch with a 6.78″ AMOLED E4 QHD+ display with a high refresh rate of 120Hz, a 16MP selfie shooter, and a triple camera setup on the rear with a 50MP Samsung GN5 primary sensor, a 50MP ultrawide angle sensor, and a 14.6MP telephoto lens.

It will be powered by the Snapdragon 8 Plus Gen1 chip with up to 16GB LPDDR5 RAM and 1TB of UFS 3.1 storage. Talk about bang for your buck, in terms of storage and performance, we can expect the 10 Series to be a top performer.

In terms of battery life, we get a 4,550mAh one with support for 200W fast charging. Both smartphones will run on Android 12 OS with OriginOS Ocean UI on top. The base version of the lineup will have an in-display fingerprint scanner while the latter will arrive with an ultrasonic in-display fingerprint scanner. The iQOO 10 will be rebranded as the 9T 5G when it launches in India.