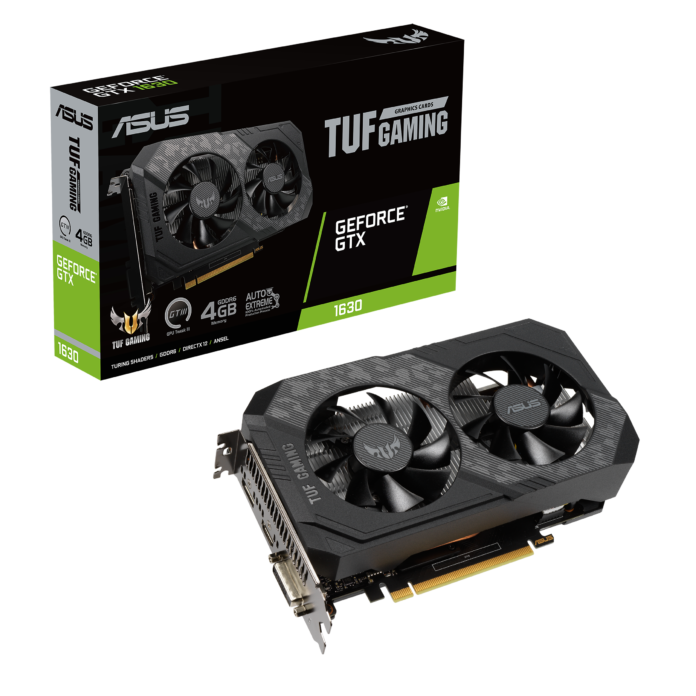 The Phoenix GeForce GTX 1630 is built using ASUS Auto-Extreme Technology, which cleanly solders components without human intervention for a high-quality final result designed to stand the test of time. Afterwards, the graphics cards undergo a gauntlet of testing that lasts 144 hours to ensure they reach users’ hands in tip-top shape.

Both TUF Gaming models are only 2.3 slots wide and just over eight inches long, allowing users to easily fit them into most standard cases.

Featuring a dual fan design with space-grade lubricant, the TUF Gaming cards share the same Auto-Extreme assembly process and 144-hour validation as the Phoenix GeForce GTX 1630. ASUS also conducts additional testing to verify compatibility with other components in the TUF Gaming family, to ensure that users will never need to worry about stability or longevity.

With HDMI® 2.0b, DisplayPort™ 1.4a, and DVI-D ports, these graphics cards are great options for multi-monitor enthusiasts who want to upgrade an existing setup. Both cards also feature NVIDIA’s G-SYNC™ technology, ensuring that when using a compatible monitor, screen tearing is a thing of the past.

Previous articleBitcoin continues to keep tumbling raising the heat in Crypto-market
Next articleHigher taxes will be catastrophic for the online skill gaming sector: Industry bodies AIGF, FIFS and EGF come together to raise concern over a likely GST increase on Skill Based Online games