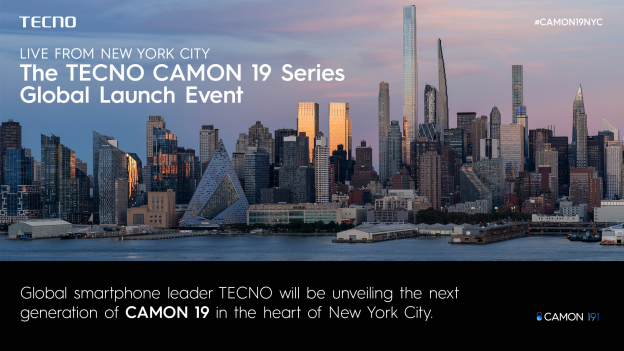 TECNO will be launching its Camon 19 Series smartphones on the global stage at a grand event that will be held on the 14th of June, it will be held at the iconic Rockefeller Center in New York City. The smartphone maker is sending a statement by holding such a big launch, it is trying to increase its global reach with this event.

The smartphone maker is diverting its focus towards premium offerings by combining fashion with innovative technology. This is the first time the company has held a launch event on such a big dais, New York City is the grandest of all cities and the location is in accordance with TECNO’s focus on the coming together of art, fashion, and technology through its latest smartphone lineup.

“New York is a global trendsetter in many dimensions, including fashion, art, and design, which appeals to TECNO customers. The selection of New York City shows TECNO’s strength in fashion and technology innovation and its brand vision to bring the perfect fusion of stylish design and state-of-the-art technology to our users,” Lucia Liu, the Cheif Brand Director of the company stated.

This announcement has led to increased anticipation around the arrival of the latest Camon Series. Though details of the launch and other features of the smartphone lineup are not yet confirmed, one thing is certain it is not just a plain old premium smartphone but it is a work of art and something we have never seen before. The fact that the smartphone maker won the IF Design Award means that it features a premium design, something that we have never seen before featuring slim bezels, and a dual-ring triple-camera setup.

The photography and performance of the smartphone are the focal points of the upcoming series, the brand has partnered with Samsung to develop an amazing RGBW lens technology that is set to bring a better low-light shooting experience with advanced light sensitivity and reduced light crosstalk.

The brand announced that it will be the first to make Android 13 beta available on its latest Camon 19 Pro 5G and it shared its intentions to update the Camon 18 Series to Android 12, which will offer a more secure and technologically advanced smartphone experience.

The brand will continue to focus on the fusion of technology and fashion, the new series is set to exceed expectations with respect to this appearance, which will officially be unveiled at the upcoming launch event in New York.

Previous articleHere’s how to pre-book the Nothing Phone (1) after it launches.
Next articleElectric Vehicle sales will increase to 8-9 lakh units this fiscal year as per SMEV