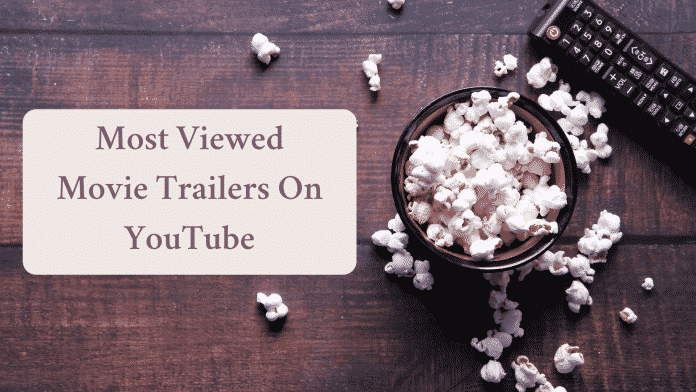 Nowadays, YouTube is one of the great sources where people get new information about everything. They also use the platform to discover what is now highly appreciated by the broad audience and decide if they want to check it out. Movie trailers are a perfect example of such YouTube exploitation – most-watched trailers that take top places in rating serve as a help to choose a movie to see in the theater or at home. For entrepreneurs, top watched trailers are the indicator of the audience preferences. From each video, they take experience and see what kind of content they should infuse more resources (check out YouTube views for $1 to see how it works).

The upcoming release of the next Marvel movie about Spider-man is showing significant agility among fans. The incredible number of views gathered by this movie’s teaser trailer is 355,5 million by September 2021. This fact solely indicates how successful the franchise is, as it takes over the attention of more and more people, keeping up the rating of the production company.

Marvel, like many other productions, uses several types of a trailer. Teasers are supposed to engage viewers primarily and build intrigue around the plot of the upcoming movie. In the case of the Avengers, the franchise finale was expected by lots of fans, and of course, the first trailer that was released has gained 289 million viewers quickly.

Later, the final trailer that revealed the whole amount of epicness was also greeted, as the fans were desperately looking for more details about the future premiere. The final trailer of Avengers: Endgame gained almost 270 million views, and as the statistics show, most viewers were pleased with the way the movie turned out.

The teaser trailer of the franchise finale’s first part has achieved 230 million views. The plot was a secret, yet the teaser revealed a lot of interesting details that heated the interest of the public. Before the launch of the promotion campaign for the last part of the epic story about our favorite superheroes, the Infinity War was considered as the most viewed movie trailer on YouTube. It was stimulating Marvel Studios to begin spinning the wheel of the next generation of their movies, like Eternals, television series VandaVision and Loki.

Another mighty production has engaged a lot of people and retained the attention of the audience to the classics, as the first teaser of The Lion King reboot has appeared on YouTube. The promotion campaign was massive, and the first teaser that revealed the super-technological digital rework of the classic Disney animation has started the buzz about further projects in this niche. The teaser of The Lion King has gained almost 72 million views in a short time, showing how many people are waiting for a chance to see the eternal classic story in the cinemas again, all new and modern.

197 million views support the teaser trailer of the legendary horror movie reboot. The viewers could check out the technical details of the future premiere, which are truly stunning, and feel the chills for the horror and angst bright by the general atmosphere of the movie. Warner Brothers company has gotten back to the top of the productions with this film after a slight decrease in popularity due to the end of the Harry Potter franchise.

The final trailer is the one that opens the epicness of the upcoming movie entirely and is usually released close to the premiere. The goal of it is to keep up the interest of the audience in the movie. And the trailer of The Infinity War has completed it at the fullest – with 179 million views, most of which were collected before the movie’s premiere in theaters. Marvel Studios can definitely be called a leading company on youtube. The summary number of views and engagement they get through social media is enormous and continues to grow as the production spins out new franchises to maintain their rating and profits.

Disney production has cleared to the audience that they are aimed to reboot all the influential films they have created in the XX century. Mulan was one of the mysterious projects, as the filming of it was kept in secret, as well as rumors had it that the project was closed after all. Nevertheless, when the first teaser was released, the audience burst with the interest in the film. The video on YouTube has gained 30 million views in the short term. All the details were watched and examined under a microscope, as an animated version of Mulan is considered to be an eternal classic and is loved by millions of people. Disappointment or not – it is up to you to decide.

With the constant heat of the public attention to the unique technology that has brought to life the loved characters from Oscar-winning Disney animation, the final trailer was like a headshot, revealing all the beauty and epicness of the upcoming premiere. 174 million views are proof of that, along with great buzz on all other platforms. When the movie was finally demonstrated in the theaters, it was a huge sensation, as the new ecranisation turned out to be a work of art that has turned the younger generation’s attention to the classic plots that had once excited their parents back in the 90ies.

The Fast and Furious Saga continues to gain more and more fans around the world. The teaser for the 9th part of it has collected over 150 million views on youtube, bringing up the fact that cool cars, speed, and adventures still excite the public, along with the charisma of Vin Diesel’s bald head.

The most viewed movie trailers on youtube are an illustration of the mechanism of modern production and marketing. These short videos, which once were an engagement tool for TV commercials and 15 minutes before the movie in the cinema, now are a practical marketing tip that not only helps to promote an upcoming film but also helps the production to gather a lot of essential data: