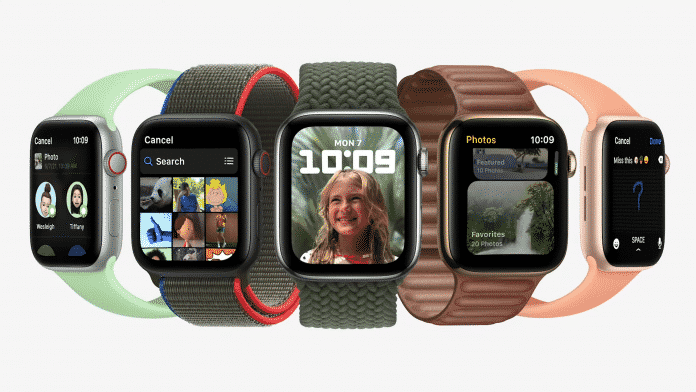 Yesterday, at its iPhone 13 launch event the Cupertino giant has confirmed the launch of the new watchOS 8 on September 20th. The new OS for Apple Watch includes watchfaces, workout types, and Focus mode along with new features support for iOS 15.

The Cupertino giant will be debuting a new Mindfulness app that will be adding new animations and other features to help you relax. Apple also announced that the fitness app would be getting more workout types for tai chi and pilates.

In addition, with a new OS comes a new watch face, and apple will not let you use a photo taken with the iPhone’s portrait mode and layer text and other information behind it. Users will also be able to customize the texts shown and how it integrates with the image itself.

Apple will also be updating the Photos app on the watch, and it will get a new layout and the ability to share photos directly through Messages or Apple’s Mail app. The new watch interface will also be getting features coming in the iOS 15, and it includes a new focus mode that lets you choose apps or contacts to push notifications to you in specific contexts.

Also, this new watchOS 8 will be shipping with the new Apple Watch Series 7 and will help take advantage of the more display. The new watchOS will bring new workout types for Pilates and tai chi as part of the new Fitness+ updates, so gear for the new Apple products along with new OS to use it.

Apple is providing its Fitness App directly with iOS 16