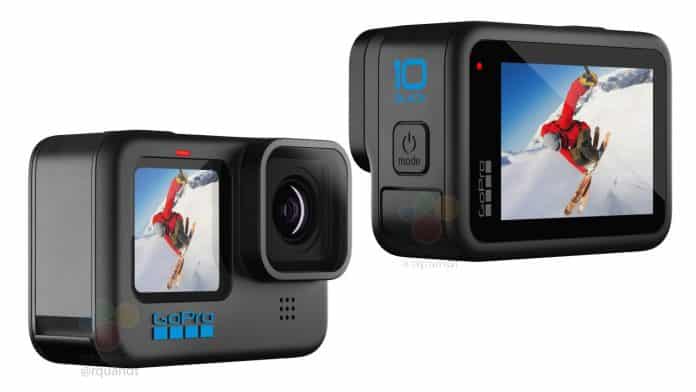 GoPro is all set to announce its new action camera on September 15, but a recent leak has revealed many things about the upcoming Hero 10 Black. To recall, the company had unveiled the Hero 9 Black action camera in India last year around October. It came with a new design, added display on the front, included support for an add-on super ultrawide camera and more. This time around, as per the leaks, the GoPro Hero 10 isn’t getting a major design overhaul. However, the company is tipped to be adding new features to the device.

According to a WinFuture report, the GoPro Hero10 Black will look similar to the Hero9. It might be the same size, retain the front display and offer the same looks. However, we can notice a change in the colour scheme. The GoPro logo is now coloured in the company’s blue colour. That being said, most of the major changes lie inside the camera.

The device is touted to come equipped with a new GP2 processor, which is said to bring a significant boost in performance that will support refresh rates. That will translate into better video in low lighting conditions, as well as improved image stabilization, according to WinFuture’s sources. There’s also a new lens cover with a hydrophobic (water-repellent) coating that minimizes reflections too, which should further improve the quality of the photos and videos you can grab with the camera.

As for the display on the front, WinFuture says it will run at a faster refresh rate than the one on the Hero 9 Black, for a viewing experience that’s more fluid. In addition, expect touch controls and a shutter release button that operate faster.

The GoPro Hero10 Black could have support for a 5.3K video recording at 60fps, 4K recording at 120fps and 2.7K recording at 240fps. Moreover, it is getting a sensor upgrade too. As per the report, the upcoming GoPro camera will offer a maximum photo resolution of 23MP, as compared to 20MP on the Hero 9 Black. Moreover, the upcoming GoPro camera is said to come with HyperSmooth 4.0 to offer “gimbal-like stabilisation.” Other features include 10 metres of water resistance, TimeWarp 3.0, support for RAW photos, SuperPhoto, HDR, etc.

There is no word on the pricing and availability at the moment. The device could be launched on September 15. The GoPro Hero10 Black price is tipped to be around 539.99 euros (approx. ₹47,000) without the annual GoPro Quik subscription. The price seems to have been increased by 50 euros as compared to the predecessor. “One possible reason for this could be due to the chip crisis and bottlenecks of poor availability of various components and materials,” says the report.