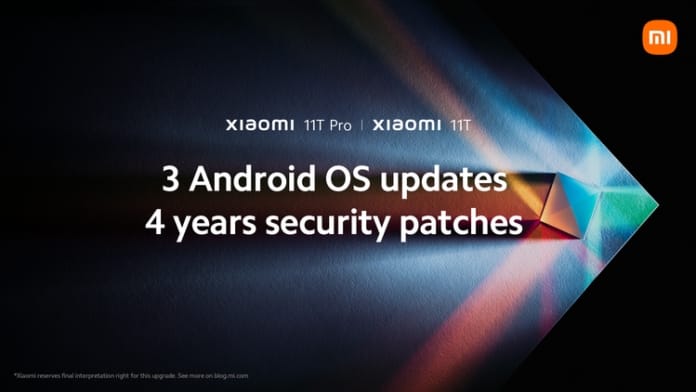 Xiaomi is set to unveil its first affordable flagship devices – the Mi 11T and the Mi 11T Pro. Though Xiaomi has now hinted at the software support that its new devices will receive, and it seems like the company is offering a real deal to the potential buyers here.

Xiaomi has announced through a blog post that the Mi 11T and the Mi 11T Pro will receive “three generations” of Android OS updates. This means three versions of Android will make their way to the two Xiaomi smartphones. In addition, the company has promised four years of security updates on the devices too.

Xiaomi has not made any other device a part of the announcement but has said that it is working on giving similar treatment to already launched devices. Xiaomi with its new updates policy looks to rival Samsung that has promised four years of security updates for many of its devices. The upcoming Xiaomi 11T and Xiaomi 11T Pro are tipped to launch later this month. Xiaomi has announced that it will change its update policy along with the launch of these smartphones.

“With the continuous improvement made to smartphone hardware, the life cycle of a smartphone is gradually lengthening, meaning users aren’t required to replace their smartphones as frequently,” said Albert Shan, Head of Product & Technology at Xiaomi in a prepared statement. “We will also provide users with security updates that ensure their devices operate securely for a longer period of time.”

Xiaomi’s latest announcement is similar to the one made by Samsung in February. Although, the South Korean tech giant’s promise is not just for its flagship series but a lot more Galaxy devices. These phones and tablets will receive regular security updates for a minimum of four years from their launch.

When it comes to the rumours that are making on the internet, the smartphone is expected to arrive with a 120Hz display that will be ideal for gaming and watching multimedia content, a 64MP primary camera sensor at the rear accompanied by a telemacro sensor and an ultra-wide sensor and a capable MediaTek processor.

Given that the flagship smartphones will see the light of the day on September 15, we will get to know more details soon. Until then, we can expect some more clarity from the company or tipsters.

Previous articleJioPhone Next in advanced trials, with festive-season rollout to commence before Diwali
Next articleSamsung will use different AMD mRDNA GPUs in its next-generation Galaxy A series