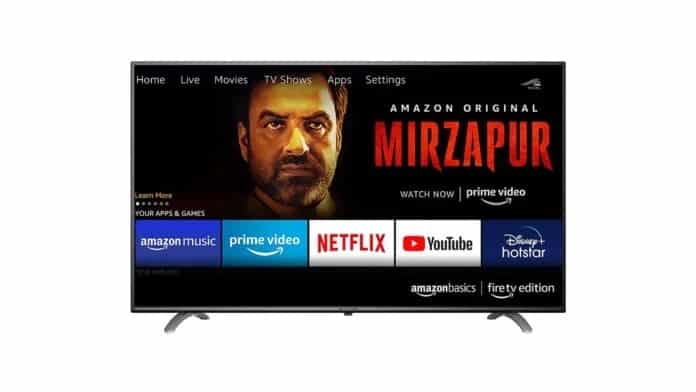 US-based ecommerce giant Amazon appears to be all set to launch Amazon-branded TVs in the American market. The Alexa-powered smart televisions could be launched as soon as October 2021.

As per Business Insider, Amazon has been planning to launch Amazon-branded TV in the US. The company has reportedly worked on the TV for two years, and it could be launch as soon as October. The report reveals that the TVs will be in screen sizes in the range of 55 and 75 Inches. There are two versions in the works: One made by a third party, TCL, that will carry Amazon branding and be integrated with Alexa. And a second TV that Amazon engineers are reportedly developing in-house. The TV will be Alexa-powered Smart TVs, and development involves teams from Amazon Devices and Lab126, the company’s research and hardware division.

Amazon is not entirely new to the TV business. The e-commerce company offers AmazonBasics branded TVs in India. It has also partnered with BestBuy to sell Toshiba and Insignia TVs that are powered by Amazon Fire TV software. Most importantly, Amazon sells Fire TV Stick, Fire TV Cube, which makes your dumb TV smarter.

The report claims that TCL is one of the third-party manufacturers that will produce the Amazon-branded Fire TVs. These models will join ones from companies like Westinghouse that already offer smart TVs loaded with the software, but that lack the Amazon brand.

Moreover, reports suggest that Amazon could partner with a large consumer electronic firm like LG or Samsung for its upcoming television. Besides sells television, Amazon also sells equipment that can make any TV smart. These devices also include Fire TV Stick and Fire TV Cube.

The report doesn’t include mention of prices, but if existing third-party options are any indication, the Amazon-branded smart TVs will likely skew toward the budget end of the range. Such price points would equip Amazon to compete with Roku, which likewise offers a variety of smart TVs loaded with its Roku OS software.