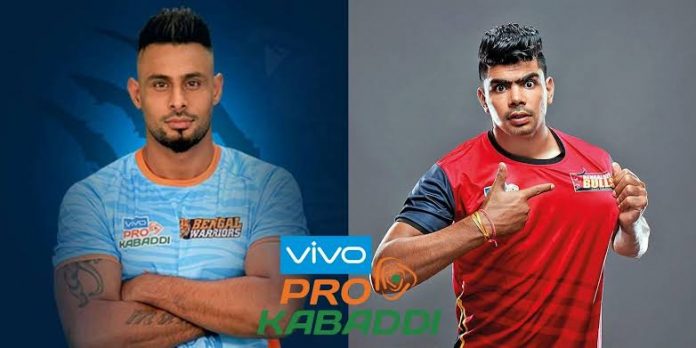 Kabaddi fans will be extremely delighted as the Pro Kabaddi League will return with a season 8 this year after a gap of two long years. As a result, there will a big auction that will take place from 29th to 31st August. However, before the auction begins, PKL franchises have the right to retain a select number of players from their existing squads.

Patna Pirates management’s decision to release Pardeep Narwal who was their most successful player comes as a huge surprise. Owing to the fact, he has led the Patna based franchise to three Pro Kabaddi League titles. Moving forward the superstar raider will be under the hammer during this season’s auction.

Pirates have opted to retain defender Neeraj Kumar and raider Monu. Further, they have decided to retain young players like Sahil Mann, Rajveersinh Chavan and Mohit. Hence Patna’s plans this season is to rebuild a team for future.

However, they have decided to release Rohit Kumar who was the raiding partner of Pawan Kumar. Nonetheless, Bengaluru Bulls will be a strong contender as usual for this year’s PKL.

Vikash Kandola is the only star player that he Haryana franchise has retained for this season as they have released their veteran captain Dharamraj Cheralathan. The Steelers have also retained youngsters like Vinay, Vikas Chillar and Chand Singh.

Jaipur Pink Panthers have let go of their star captain Deepak Kumar Chaudhary in this edition of the Pro Kabaddi League. However, the Jaipur franchise has retained the services of their star defender Amit Hooda and also kept Vishal and Nitin Rawal.

Going into the auctions, Pink Panthers have retained the most players this season. Further, they have retained young guns like Sachin Narwal, Pavan TR, Sushil Gulia and Elvarasan A to make a total of seven retained players.

U Mumba have retained their Iranian star defender Fazel Atrachali this season. Mumbai based franchise have also kept their main raider Abhishek Singh. Abishek will once again lead the attack as he was the vital source of U Mumba’s attack in season 7.

However, they have released star all rounder Sandeep Narwal and the likes of Arjun Deshwal and Surinder Singh. Whereas they have continued with Ajinkya Kapre and Harendra Kumar.

Bengal Warriors have stuck with their blazing raider Maninder Singh but have surprisingly let go of K Prapanjan who was his partner in crime in the attacking department. Further, the defending champions have also released their star defender Baldev Singh.

Along with Maninder, Warriors have retained Rinku Narwal and Iranian star allrounder Mohammad Esmaeil Nabibakhsh. Therefore the season 7 champion have maintained their core team for this season and will buy few select players to bolster their squad.

Gujarat Fortunegiants will be without the services of their captain Rohit Gulia as he leaves the side. But the franchise has retained key defenders like Parvesh Bhainswal and Sunil Kumar. They have also retained young prospect like Harmajeet Singh, Sumit and Ankit for season 8 of Pro Kabaddi League.

The Pune franchise has retained the likes of Balasaheb Jadhav, Pawan Kumar Kadian and foreigner Hadi Tajik. Although they have released their captain Surender Singh and he will be found in the auction that will be held on 29th of August.

Dabang Delhi made a no-brainer decision as they are continuing with their star raider Naveen Kumar who was the MVP of PKL season 7. Along with Naveen, Delhi has also retained Vijay and Neeraj Narwal. They have also continued with Sumit, Mohit and Balram in the New Young players category. However, they have released the fan favourite Meraj Sheykh ahead of this auction.

Tamil Thalaivas have let go of their star trio that includes the dependable raiders Rahul Chaudhari and Ajay Thakur along with all rounder Manjeet Chillar. They have decided to retain Sagar, Himanshu and Abishek that fall into the NYP category. Therefore it looks like Thalaivas will go all in during the PKL 8 auctions after releasing their experienced players.

Telegu Titans have only retained Rakesh Gowda, Ankit Beniwal and Rajnish ahead of the auctions this season. As a result, star raider Siddarth Desai will probably go under the hammer this season.

Just like Telegu Titans and Tamil Thalaivas UP Yoddha have only kept their faith on youngsters like Nitesh Kumar, Sumit, Ashu Singh and Surinder Gill this season. Consequently Yoddhas have released Rishank Devadiga, Monu Goyat, Surender Singh and their chief raider Shrikant Jadhav.

Therefore one could assume that all these franchises who have trusted their youth players might either go big in the auction or are entering into a rebuilding process by giving the arm band to a youngster.

- Advertisement -
Powered by JustWatch
Share
Facebook
Twitter
Pinterest
WhatsApp
Linkedin
Previous articleHere are the latest details about the upcoming Black Myth: Wukong title based on the 16th-century Chinese novel
Next articleHere are all the deals on Samsung Monitors at Amazon US

Pro Kabaddi League 2021: Here’s the full list of final squads of all the PKL teams after the auction