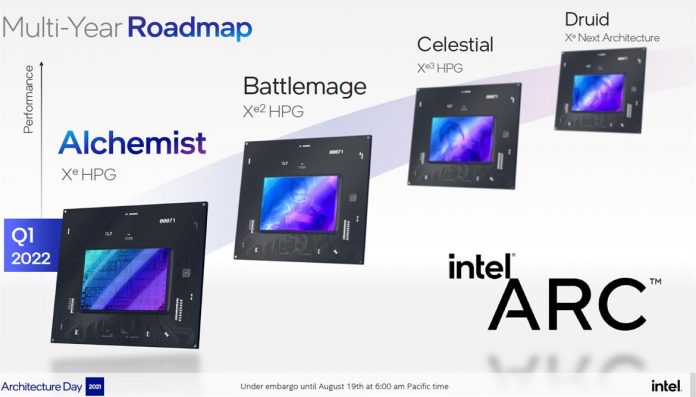 Intel has unveiled its biggest architectural shifts in a generation for CPUs, GPUs and IPUs to satisfy the crushing demand for more compute performance.

Ubiquitous compute, pervasive connectivity, artificial intelligence and cloud-to-edge infrastructure drive a diverse and expanding range of computing workloads from the desktop to the data centre.

Xe-Cores will be grouped in Render Slices, which will be used to build Intel DG2 GPUs. Each Xe-Core will be build using 16 Vector Engines (256-bit) and 16 Matrix Engines (1024-bit per engine). There is a single Ray Tracing Unit under each Xe-Core. Thus, DG2 GPUs will have an equal number of Xe-Cores and Ray Tracing Units. The DG2 GPUs feature Memory Fabric which is a large L2 Cache.

Intel XeSS will be powered by DP4a and XMX instructions. The XMX Matrix Engines are the building block of AI acceleration on next-generation Arc “Alchemist” GPUs.

Intel XeSS is temporal-based upscaling technology that will account for motion vectors (velocity) and the history of previous frames. Before they reach postprocessing, this data will be processed by XeSS XMX instructions

Intel only confirmed that the Alchemist GPU series based on Xe-HPG (DG2) GPUs will be launching in Q1 2022 but has given no further details on future generations.