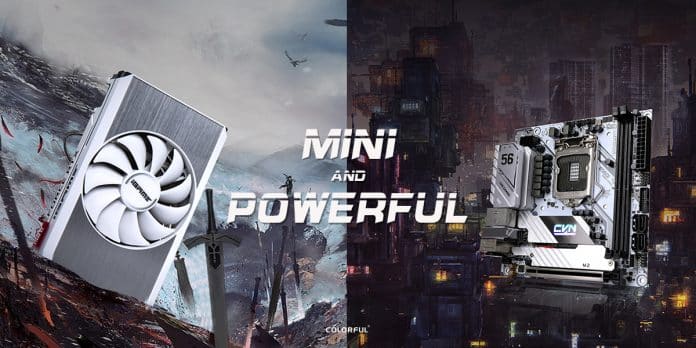 If you are someone who likes mini PCs, or Mini-ITX motherboards and even small GPUs, COLORFUL has great news for you. As we know COLORFUL is a professional manufacturer of graphics cards, motherboards, the all-in-one gaming and multimedia solutions, and high-performance storage.

Recently, it has launched the CVN B560I Gaming Series mini-ITX motherboards and the compact iGame GeForce RTX 3060 Mini OC graphics cards. These are incredibly compact motherboards and GPUs with white & grey color tone, which makes it look even better.

For the new CVN B560I Gaming Series mini-ITX motherboards, COLORFUL upgraded the motherboard’s cooling components. This includes a larger PCH heatsink, extended heatsink on the VRMs, and heatsink on the M.2 slot to provide cooling to installed NVMe SSDs. The motherboards also come with an additional 5V ARGB header to support more ARGB devices which can be controlled and customized using the iGame Center software.

To complement the launch of the new CVN B560I Gaming Series mini-ITX motherboards, COLORFUL also presents the compact iGame GeForce RTX 3060 MINI OC 12G L small-form-factor graphics card. It comes in at just 182mm in length and fits in a 2-slot PCI expansion slot. It features a white and silver color theme which perfectly complements the CVN B560I Gaming Frozen motherboard. It has a white-colored backplate with a “MINI” red tag. It also features an RGB lightbar on the visible side for added gaming aesthetics.