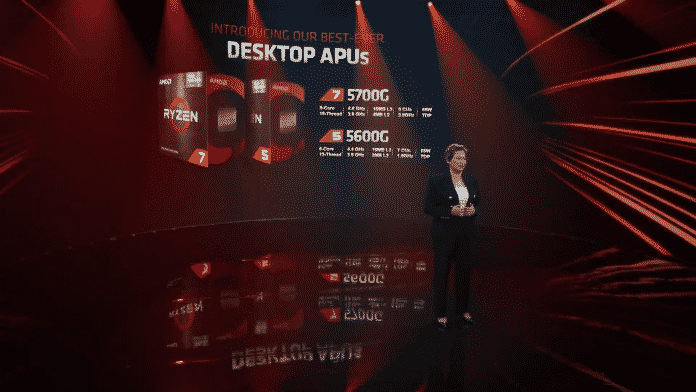 Finally, today at Computex 2021, AMD has announced its Ryzen 5000G desktop APUs for DIY system builders, after skipping for 2 generations. So, finally gamers can use these APUs to game on their system even if they lack a discrete GPU.

Already, AMD announced both of the processors last month for OEMs, so essentially, the specs is known. The AMD Ryzen 5 5600G comes with 6 cores and 12 threads, and the flagship Ryzen 7 5700G with 8cores and 16 threads.

All of these models get a TDP of 65W, so your next APU will be an efficient powerhouse that can deliver the best gaming experience with Zen 3 architecture and GCN (Vega) architecture. Also, the good news is with AMD Fidelity FX Super Resolution, you can expect more frame rates for free.

The Ryzen 5 5600G will cost you $259 and the flagship Ryzen 7 5700G will cost $359, and both of them will be available in the market from August 5th. However, there is no mention of Ryzen 3 5300G, it remains to be seen whether brings this entry-level desktop APU in the market later or not.