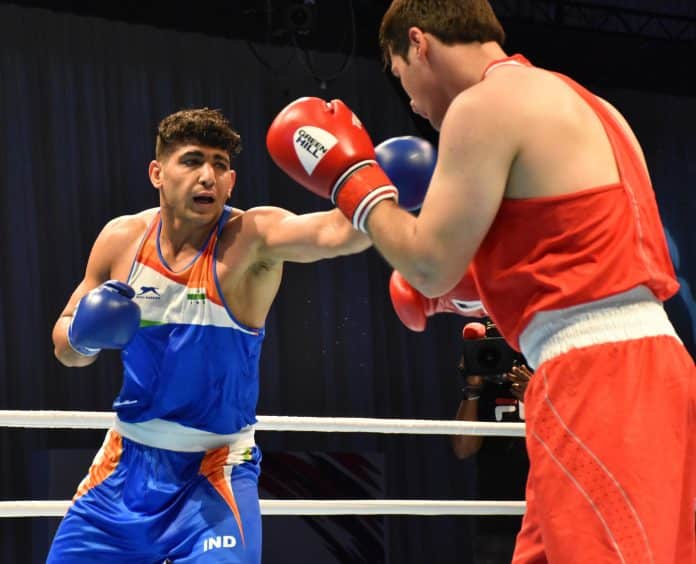 Medal confirmed in each weight category, Mary Kom among 10 women to play semi-finals on Thursday

New Delhi, May 26, 2021: Tokyo-bound Simranjit Kaur alongside two other boxers made their way into the semi-finals on the second day as Indian women assured the country of 10 medals at the 2021 ASBC Asian Boxing Championships in Dubai.

While Shiva Thapa and Sanjeet also entered the men’s semi-finals, the country is now assured of at least 12 bronze medals so far across categories at the ongoing prestigious event, jointly hosted by the Boxing Federation of India (BFI) and UAE Boxing Federation.

The World Championships bronze medallist, Punjab’s Simranjit, defeated Uzbek boxer Raykhona Kodirova 4-1 in the 60kg quarter-finals to confirm her second successive medal Asian Championships. Simrajit, who had won silver in the last edition of the event in 2019, will take on Rimma Volossenko of Kazakhstan in the semi-finals on Thursday.

Sakshi and Jasmine also managed comfortable victories in their respective categories. While Sakshi blanked Ruhafzo Haqazarova of Tajikistan 5-0 to set up a last-4 clash against 2016 World Champion and top-seed from Kazakhstan Dina Zholaman, Jaismine beat Mongolian Oyuntsetseg Yesugen 4-1 to confirm her maiden medal at the Asian Championships. Jasmine will take on Vladislava Kukhta of Kazakhstan in the semi-finals.

All the 10 Indian women boxers, including six-time world champion Mary Kom, will be seen in action on the fourth day of the event on Thursday as they will play their respective semi-final matches.

Meanwhile in the men’s 91kg quarter-final played late in the night on Tuesday, Sanjeet registered a dominating 5-0 victory to progress into semi-finals and confirmed second medal for the country in the men’s category. Earlier in the day, Shiva Thapa (64kg) entered last-4 and secured his fifth successive medal at the Asian Championships.

The third day of the Championships on Wednesday will see five men Indian pugilists, including Tokyo Olympic qualified boxers Amit Panghal (52kg), Vikas Krishan (69kg) and Ashish Kumar (75kg), fighting in the quarter-final rounds. Narender (+91) and Varinder Singh (60kg) are the other two boxers who will also be keen to make winning starts in the tournament and confirm medals for the country.

The ongoing Championships has witnessed 150 boxers from 17 countries, including strong boxing nations such as India, Uzbekistan, the Philippines, and Kazakhstan.

Mary Kom, Panghal and five others to fight for gold as Indian contingent aim for the perfect finish at 2021 ASBC Asian Boxing Championships