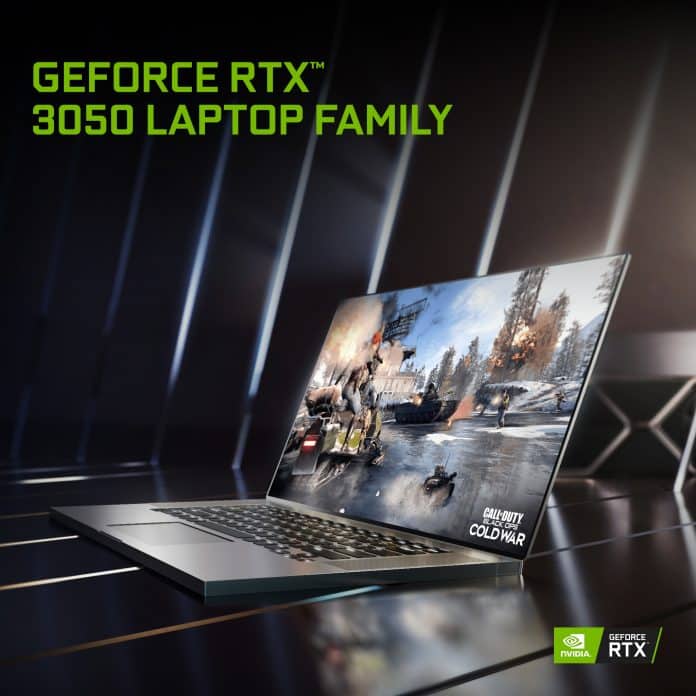 Obviously, the RTX 3050 series represent the entry-level segment which is even slower thean RTX Ampere variants. It features up to 2560 CUDA cores on the RTX 3050 Ti while sports 80 Tensor cores and 20 RT Cores. Whereas the cut-down variant or the RTX 3050 laptop GPU features 2048 CUDA Cores, 64 Tensors, and 16 RT Cores.

Both of the GPUs sport 4GB of GDDR6 memory across a 128-bit interface while TDP range starts all the way from 35W and goes all the way up to 80W. So, the laptop manufacturer has all the rights to unleash the potential of this mobile GPU.

The maximum boost clock of the GeForce RTX 3050 Ti is 1695 MHz, and for the RTX 3050, it goes up to 1740 MHz. While much like their brothers, these RTX 3050 mobile series GPUs also support PCI Express Gen4 and HDMI 2.1 output and can take advantage of the specs with Tiger Lake-H CPUs that also support PCIe Gen4.

The platforms, many based on the new GeForce RTX 3050 Ti and 3050 Laptop GPUs, bring NVIDIA’s Ampere architecture with dedicated RT and Tensor Cores to the most mainstream audience yet, and expand the number of RTX 30 Series laptops to more than 140.

“The latest wave of laptops provides the perfect opportunity to upgrade, particularly for gamers and creators with older laptops who want to experience the magic of RTX,” said Mark Aevermann, director of product management for laptops at NVIDIA. “There are now five times more RTX 30 Series gaming laptops that are thinner than 18mm compared with previous-generation RTX systems, delivering groundbreaking performance with very sleek and portable designs.”

Laptop owners, who typically upgrade after about four years of use, can see enormous performance gains with the newest GeForce RTX 3050-class Laptop GPUs. With NVIDIA DLSS, GeForce RTX 3050 Ti laptops are also up to 2x faster than previous-generation systems.

Additionally, creators can experience DLSS acceleration in applications such as D5 Render, SheenCity Mars and NVIDIA Omniverse, which enable artists to visualize their designs in real-time instead of waiting for ray-traced scenes to finish rendering.

“Consumers are spending more time than ever on laptops — PC gamers, creators and students are all driving demand for massive improvements in graphics horsepower and AI-accelerated applications,” said Bob O’Donnell, president and chief analyst at TECHnalysis Research. “Laptop manufacturers are responding to this market momentum by designing thinner, higher-performing models to meet the various needs of consumers — it’s no wonder NVIDIA GPUs are powering so many new designs.”

For those who enjoy competitive games, new GeForce RTX 3050 Ti laptops can deliver 144+ FPS and sub-25ms system latency in titles such as Overwatch, Rainbow Six Siege and Valorant, thanks to the NVIDIA Reflex Low Latency mode. Seven out of the top 10 competitive shooter games have NVIDIA Reflex support, which allows gamers to achieve lower system latency so they can play their absolute best. NVIDIA Reflex is also supported across the entire RTX 30 Series lineup.

All RTX 30 Series laptops include support for NVIDIA Broadcast, an app that transforms laptops into a home studio. This has now been improved with new AI effects — room echo removal and video noise removal — and updated the audio noise removal to eliminate sounds from cats, dogs and insects. These effects, together with the previously released virtual background and auto frame, can now be stacked to provide more control and quality over audio and video.

RTX-based Studio laptops are designed for creators to meet their demands for performance and reliability. Newly unveiled NVIDIA Studio laptops equipped with RTX 30 Series GPUs now render creative and professional apps up to 2x faster than the previous generation. Video editors can work with 8K RAW

footage, use AI to simplify workflows and reduce encode times by up to 75 percent. Additionally, artists can take advantage of up to 16GB of graphics memory to work with huge assets or multiple apps simultaneously for increased productivity and efficiency.

New GeForce RTX 30 Series laptops, including GeForce RTX 3080, 3070 and 3060, are available starting today from the world’s top manufacturers, including Acer, Alienware, ASUS, Dell, Gigabyte, HP, Lenovo, MSI and Razer. RTX 3050 Ti and 3050-based laptops will be available this summer.