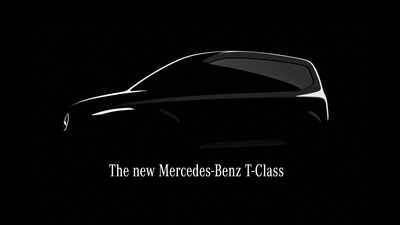 Mercedes reveals the concept of their upcoming range of vehicles including the van.

Mercedes today showed a few glimpses of their upcoming electric-powered van. The Mercedes T-class has a capacity of 7 people and is set to be released in 2022.

It consists of 21-inch light-alloy wheels and sliding doors on both sides to allow access to the third row of seats. It is 4.945 meters in length, 1.863 meters in width ad 1.826 meters in height, it is 92 mm longer, 8mm wider, and 8mm taller than the Volkswagen Candy max.

The long wheelbase and tall stature of the new MPV model help maximise the vehicle’s internal space. Now the second row can accommodate up to 3 children as well.

The Van has Nappa leather seats while the design of the dashboard, controls and touchscreen display has been kept the same as earlier.

Head of Mercedes-Benz Vans, Marcus Breitschwerdt stated about the new arrival “We are expanding our portfolio with the T-Class. It will appeal to families and private customers who enjoy leisure activities and need a lot of space and maximum variability without forgoing comfort and style “. And as the Concept EQT shows: we will also be offering a fully electric model in this segment in the future.”

They are facing competition from Tesla, BMW and Volkswagen currently.

In the past, Mercedes’s van division’s joint vehicle projects with Renault and Nissan resulted in a failure. Also, Mercedes have pulled the X-Class pickup which was based on Nissan Navara due to poor sales.

This resulted in Mercedes analysing their investment in the van department as recently Daimler is also reportedly looking to sell its heavy truck operation later this year.

Mercedes will expect to rack up quite a sale for this all-new T-Class as they claim it to be one of a kind. What are your thoughts on it? Do share with us…

Lewis Hamilton to race with Mercedes in 2021

Mercedes-Benz comes up with the MBUX Hyperscreen at CES 2021