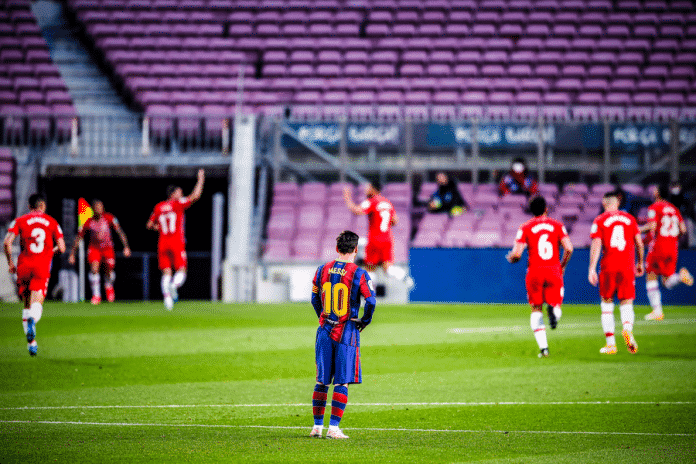 Barcelona have potentially bottled their hopes of securing the LaLiga title this season, with Granada winning at Camp Nou for the first time ever in their history. The Catalonians had the chance to go to the top of the table if they won their game in hand, but lost out completely.

Lionel Messi scored his 26th goal of the campaign to give the hosts an early lead. And things were going well up until the hour mark, but that is when Granada capitalised. Darwin Machis netted home in the 63rd minute to draw level, getting the better of both Sergi Roberto and Oscar Mingueza.

With ten minutes remaining on the clock, Jorge Molina headed past Marc-Andre ter Stegen, converting a brilliant cross from the left flank by Adrian Marin to put the visitors ahead. Barcelona, despite having made substitutions to bring on Trincao, Ousmane Dembele and Pedri, could not draw level in the dying minutes of the game.

The objective was quite simple, to beat 8th placed Granada and climb to the top of the league for the first time in the season. However, Ronald Koeman’s men could not deliver with the stakes high, and now rely on either one of the Madrid clubs to choke to get ahead in the league.

Barcelona themselves go up against Atletico Madrid in a little over a week, and could make up for the loss. However, Real Madrid also have the chance to do the same with their match against Sevilla. No matter the winner, we will have witnessed the most intense race for the crown in years when all is said and done.