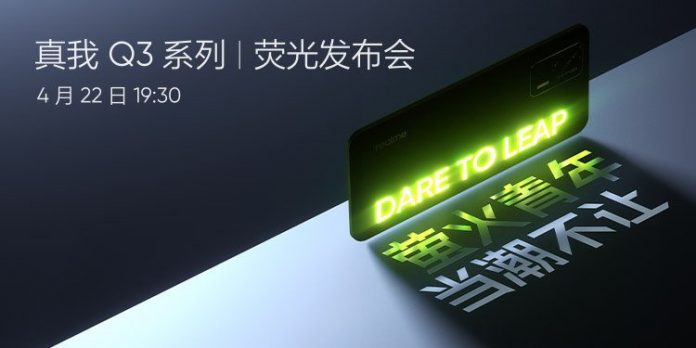 Realme has finally revealed the launch date of the Realme Q3 in China, which is on April 22. The smartphone has few special features that Realme CMO had revealed in the past few days. The phone has been officially revealed for the first time in official posters. This time the company has put some work in the colour and has come up with a new variant of colour named Firefly. The launch will start from 19:30 local time on April 22 in China.

According to Realme CMO Xu Qi Chase, “the design is inspired by the unconstrained Y2K culture. For the first time, we combined luminous materials with fluorescent colors. After fully absorbing sunlight, the words “Dare To Leap” on the back cover of the mobile phone will show fluorescent effect like a firefly in the dark!”

Moreover, Realme Q3 Pro 5G with model number RMX2205 has been spotted on Geekbench. The listing reveals MediaTek Dimensity 1100 chipset paired with 8GB RAM. The phone will run on Android 11. Realme Q3 Pro has also visited TENAA. The listing also records a 6.43-inch AMOLED panel along with MediaTek Dimensity 1100. The primary sensor is 64MP among the triple rear camera.

From the official image of the smartphone we can see triple rear camera setup and the mention of 64MP camera. The “DARE TO LEAP” logo at the back looks like the neon colour and it glows in the dark as well. Other reports suggest that the display will support 120Hz refresh rate and a 65W fast charging.