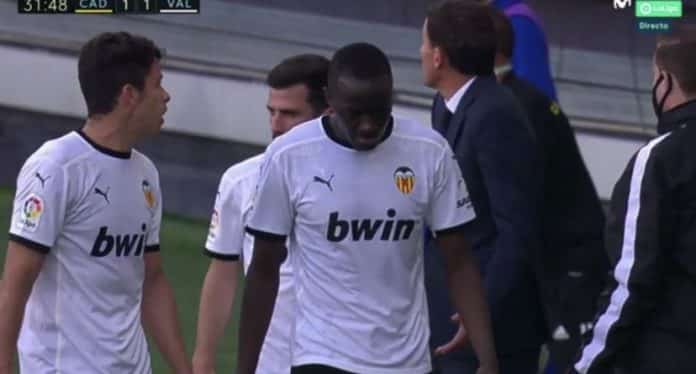 Valencia’s Mouctar Diakhaby and Cadiz’s Juan Cala were involved in a very tense confrontation in the match between the two teams held recently. The Cadiz player has been accused of abusing Diakhaby racially, which led to the visiting team, Valencia, walking off the pitch in protest of the act allegedly committed by Juan Cala.

The visitors walked out on the pitch and decided to continue the game, as has been revealed recently, after having a meeting with Diakhaby and discussing with the player. The official statement released by the club says that the players continued the match “in order to fight for the honour of the club, but denounce racism of any kind”.

Juan Cala has been very relaxed towards the accusations pointed at him, “I’m very relaxed. Tomorrow we will say everything in the press conference. It seems to me that in this country innocence is not contemplated.” the player told Gol on Monday on being asked by the media about the situation.

The referee’s account of the situation has also shed more light on the events that transpired in between the two during the game:

“In the 29th minute I stopped the match due to a confrontation between players from both sides. Player number 12 of Valencia C.F., Mouctar Diakhaby, once booked for arguing with an opponent, tells me word for word: “He called me a s***** black man” in reference to player number 16 of Cadiz C.F. Juan Torres Ruiz (Juan Cala).

“This fact was not perceived by any member of the refereeing team. After a few moments, Valencia C.F. decide to abandon the pitch. For this reason, the match is temporarily suspended. Both sides enter their respective changing rooms. After a few minutes of suspension, the Valencia C.F. delegate David Rangel Pastor, in presence of the Cadiz C.F. delegate Antonio Navarrete Reyes, tells us that they decide to substitute player number 12 Mouctar Diakhaby and continue with the game.

“Moreover, it was agreed to give both sides a five-minute warm-up in order to avoid injuries. The match was resumed 24 minutes after suspending it, and was carried out as normal from that moment onwards.”