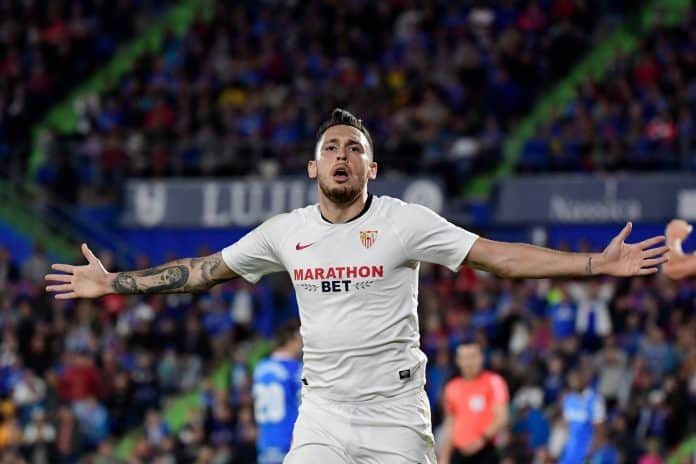 Liverpool is considering a move for Sevilla winger Lucas Ocampos the next summer in a sensational swap deal.

Liverpool boss Jurgen Klopp is monitoring the progress of the Argentine. According to a report by La Razon, the German coach can offer a player plus cash deal involving Japanese international Takumi Minamino heading in the opposite direction to the Estadio Ramon Sanchez Pizjuan.

Takumi Minamino is currently on loan at Southampton. The Japanese international was lacking his first-team opportunities limited at Liverpool in the first half of the season. For more game-time, he joined the Saints on loan last January.

Since his arrival at Anfield last season, after a blistering spell at Red Bull Salzburg, it was expected that he would continue to deliver the same in the Premier League. But he failed to impress Jurgen Klopp and others with his performance. He has made just 31 appearances for Liverpool and scored only 4.

On the other hand, Argentine winger Lucas Ocampos has impressed everyone with his performance. The 26 years old has scored seven goals and provided four assists in 31 appearances across all competitions for Julen Lopetegui’s side.

Sevilla has some big financial issues recently. So, they may sell some of their key players to solve the problems. Ocampos is one of their most saleable assets.

Ocampos has a £56m release clause in his contract with the Spanish side. Liverpool hopes to get their man by offering Minamino, who is valued at around £10m, with another £40m.

It will be gain for both the parties if the deal goes through.