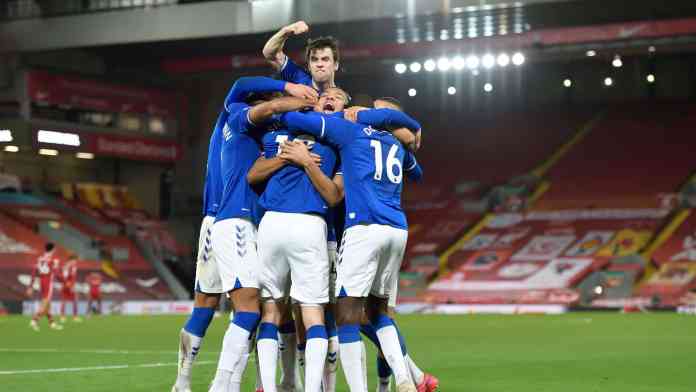 Everton won their first Merseyside derby in 22 years at Anfield as the visitors managed to defeat the reigning Premier League champions 2-0 in their own backyard.

Carlo Ancelotti’s Toffees were the better team on the night as Richarlison’s early opener was followed up by a penalty in the second half that was put away by Gylfi Sigurdsson to seal the deal.

Here is what Ancelotti had to say regarding the historic victory on the other side of the town:

‘I realise that I am the first manager that beat Liverpool after 21 years. I don’t know if this is enough to be in the history of this club, but if it’s not enough, I am working

‘I am really pleased and really happy for the club and the supporters. I could only imagine if our supporters were there tonight, but I hope they are going to celebrate tonight.’

The howling wind on the night made for a lot of long-range efforts, and resulted in many great saves from both Jordan Pickford as well as Alisson, despite the latter being beaten twice on the night.

Liverpool captain Jordan Henderson was substituted after only half an hour into the game due to a niggling thigh issue that brought on Nat Phillips, resulting in Ozan Kabak and Phillips being the 18th unique centre-back partnership for Jürgen Klopp’s team this season, owing to their injury-plagued squad.

Moreover, Liverpool have now lost four home games in a row, after spending years unbeaten at their home ground.

Everton, on the other hand, will be heading into their game against Southampton with all the momentum in the world. Despite how the season ends, this could be one of the biggest victories in Everton’s history and turn the conclusion of the campaign around if they finish outside of the European places.