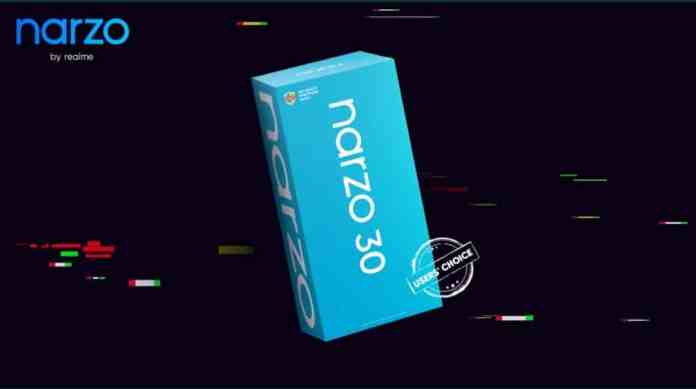 As reports are coming out, Realme will very soon launch its Narzo 30 series. As per a recently released poster from Realme, we could see the names of only Narzo 30A and Narzo 30 Pro. So, it is still confusion regarding how many models there will be in this series. In the meantime, Realme CEO Madhav Sheth has revealed the first look of the Realme Narzo 30 Pro, showing the rear panel and the retail box. It looks like a plastic back in that image having a small Realme branding at the bottom-left. So, let’s see what can we expect from the Pro variant of the Narzo 30 series.

As reports have come out, the Realme Narzo 30 Pro will be powered by a MediaTek Dimensity 800U chipset. Regarding the display, it will have a 6.5-inch FHD+ IPS LCD panel having a faster refresh rate of 120Hz. As it is not an AMOLED panel, this phone will have a side-mounted fingerprint scanner.

As of now, we have no idea about its storage and RAM variants. Coming to the camera section, as we can see in that image, it is a rectangular triple rear camera setup supported by an LED flash that includes a 48MP primary sensor along with an 8MP ultra-wide sensor, and a 2MP tertiary sensor. For selfies, this phone offers a 16MP selfie snapper at the front. The Realme Narzo 30 Pro will be fueled up by a bigger 5,000mAH battery supported by 30W of fast charging.

The pricing of the Narzo 30 series has not been confirmed yet. But it is likely to have a decent budget-friendly price range like its predecessors.