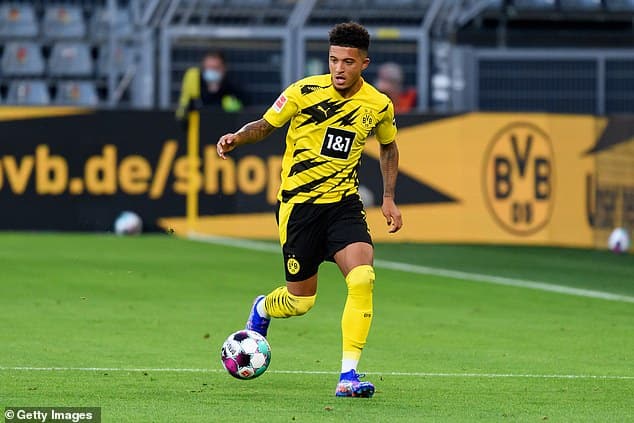 The Jadon Sancho transfer saga has been going on for a long time. Premier League club Manchester United wanted to sign him but they were refusing to pay the price tag put on by Borussia Dortmund.

Last summer, Sancho came very close to signing for United but in the end, it didn’t fell through. This ongoing transfer saga has also affected his form on the field.

As per reports, Jadon Sancho now wants to leave Borussia Dortmund and the negotiations can begin in this winter transfer window even though he leaves in the summer.

Speaking on the Transfer Talk Podcast, as quoted by the Express, Honigstein said: “He’s [Sancho] beginning to click again. He looks really sharp, he looks up for it.”

“But everybody in Dortmund knows nothing will happen in January, the player is not agitating for a move, there’s a very clear agreement that transfers of that magnitude at Dortmund will only happen in the summer.”

“There was a big transfer announced in January 2019. That was Christian Pulisic [to Chelsea]. But remember, even his deal was the deal for the summer.”

“So no one’s stopping United, if they went out, and felt really confident, to say, ‘let’s do this deal now, let’s make sure we get in now’. And maybe then announce it at the end of January. That’s inherently possible.”

“We just haven’t seen or heard anything to suggest that they are indeed ready and willing to come back to that negotiation at the moment. I think everyone at Dortmund is under no illusions that the player wants to leave.”

“But they think that the offers and the real negotiations will start closer to towards spring when clubs are perhaps in a better position to understand how much money they’ll have available for their transfer window in the summer.”

Honigstein also went on to hint that Dortmund’s valuation could lower. The Bundesliga side slapped a whopping £108m price-tag on Sancho during the summer which was arguably the biggest stumbling block in the proposed deal.

However, that could change in the coming weeks, Honigstein said: “United are saying ‘you’re quoting us prices that are pre-corona prices but come on, that’s not realistic.”

“And I think there will come a point where the player will also feel that his value needs to be realistic in order for him to be able to move.”

“So Dortmund cannot now come back and say, ‘you know what, actually, he’s had another great season, he’s one year older, let’s make it €160m’.”