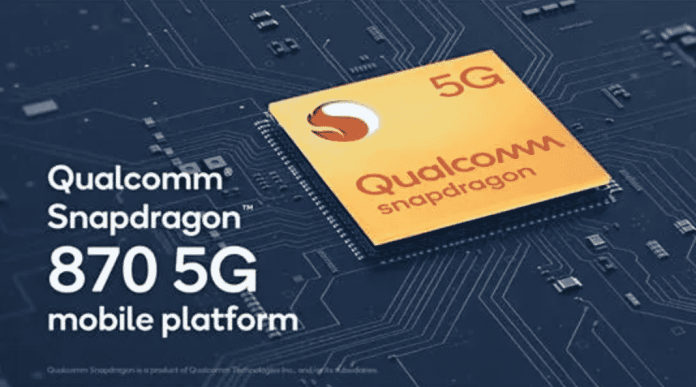 In December last year, Qualcomm announced the Snapdragon 888 flagship mobile SoC and that surprised everyone as we expected that it would have launched a Snapdragon 865 Plus successor i.e. a Snapdragon 870 series chipset.

It seems as per the reliable tipster @stufflistings or Mukul Sharma, Qualcomm will announce a new mobile SoC today that will sit between Snapdragon 865 Plus and the new Snapdragon 888.

This should obviously be a 5nm based Snapdragon SoC and it was kind of coming as Samsung and MediaTek are going on announcing a lot of smartphone chipsets. As confirmed again by Mukul Sharma, it is the Snapdragon 870 chipset.

This is an interesting move by Qualcomm and obviously, the new chipset will be having 5G support. After having beaten by MediaTek recently, Qualcomm seems to launch more chipsets as the competition seems aggressive a lot more than ever.

Most probably, we will see the new Snapdragon 870 feature on a Motorola Edge S smartphone and we will share all details of the new chipset after launch. So, keep an eye here!!