Liverpool vs Manchester United ends up in a goalless draw 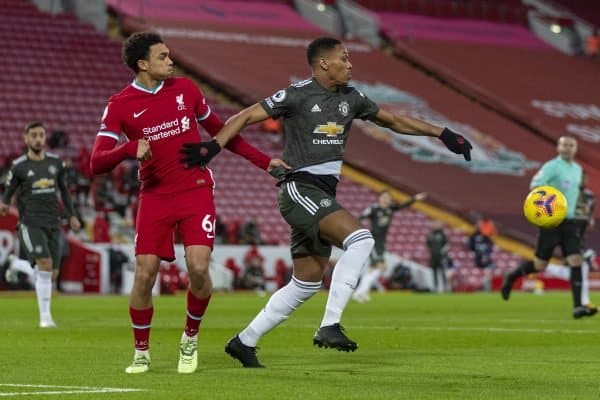 Manchester United kept their pole position in the Premier League after the goalless draw against Liverpool at Anfield tonight. Both the team failed to break the deadlock after the whole 90 minutes.

Liverpool was in some serious trouble recently. The defending champion is currently having some defensive issues as all the first-team centre backs are out for injury. Moreover, they have now failed to score in their last three games.

On the other hand, Manchester United are in a good run of games and 3 points clear on top of Liverpool. The Red Devils were unbeaten in the league away from home as well. It was a big task for Klopp’s team to stop the run of Manchester United without a proper centre back in the team.

But Liverpool has done that very efficiently. Both teams were conscious of their defensive shape and respected their opponents. Manchester United were close in two or three times but were denied by Liverpool’s goalkeeper Allison. Allison stepped up to rescue his side and secured a point for his team.

It was the first time since 1997 when they met each other as the top two teams in the league. It added an extra flavour between the two rivals in today’s game.

Today’s draw kept Manchester United at the top of the table with a 3 points lead against their rival and a 2 points lead against Leicester City who is now the second in the table. Liverpool is now winless in the last 4 matches which happened for the first time since 2016.