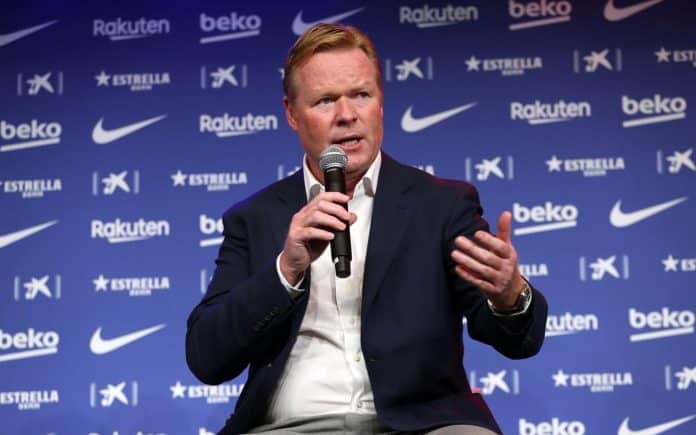 Barcelona manager Ronald Koeman took up the job in what is arguably still the most tumultuous time in the club’s recent history.

Leo Messi was on the verge of leaving the club, the financial mismanagement is still unresolved, and Josep Maria Bartomeu resigned from his post of President.

In the midst of all this, the Dutch manager has stuck to the primary focus of getting results on the pitch. While he hasn’t been as successful as the board hoped he would be, the overall picture does not look too bleak.

One of the few notable changes that Koeman has made during his time at Barcelona is ditching the long-favoured 4-3-3 formation for the Blaugrana for a 4-2-3-1 double pivot.

Additionally, Koeman has also been at work in the locker room and has quite literally restructured the player’s locker positions.

The original report was written by Javier Miguel of AS, and here is what the insider had to say regarding the issue:

“Nothing is random and a strict configuration is followed. Ronald Koeman has actively participated in choosing this order, after consulting with the captains and delegate Carles Naval with the ambition of achieving a professional atmosphere and promoting good vibes within the group.”

Captain Leo Messi sits in the middle of the U shaped arch, having a clear view of everything going around in the room. Marc Andre Ter-Stegen and Trincao sit on the either side of La Pulga.

Griezmann sits right next to Ter Stegen while Umtiti and Dembele, being fellow Frenchmen, are also placed next to each other.

Barcelona are currently in 8th, and will be looking to climb back into the top four at the very least.